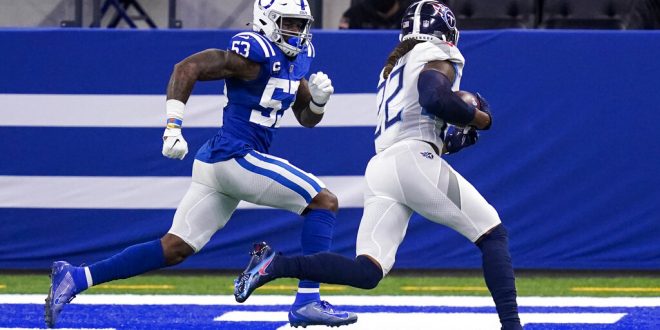 Tennessee Titans running back Derrick Henry (22) runs in for a touchdown past Indianapolis Colts outside linebacker Darius Leonard (53) in the first half of an NFL football game in Indianapolis, Sunday, Nov. 29, 2020. (AP Photo/Darron Cummings)

Following Sunday’s slate, nine teams in the AFC find themselves with a winning record 12 weeks into the season. Meanwhile, the NFC has just six such teams. Tennessee dominated Indianapolis to regain the lead in the AFC South. The Browns escaped the one-win Jaguars to guarantee their first non-losing season since 2007. The Dolphins took care of the winless Jets to grab hold of the sixth seed, all setting up an exciting finish down the stretch.

Titans running back Derrick Henry is no stranger from big games late in the season. In his career, during weeks 1-11 (5o games), Henry has 20 touchdowns. From week 12-on (23 games) he has 25 total touchdowns. Henry shifts into another gear down the stretch, and he did exactly that on Sunday. Henry finished with 178 yards and three touchdowns on 27 carries. The game was in hand by halftime as Tennessee led 35-14 at the break. The Titans ran for a total of 229 yards en route to 45-26 romping over the Colts. The win places Tennessee atop the AFC South at (8-3), as Indianapolis drops to the seven seed at (7-4).

The Titans weren’t the only team to rush for over 200 yards in a win on Sunday. Browns running backs Nick Chubb and Kareem Hunt ran all over the Jacksonville Jaguars, combining for 206 yards on the ground. For the first time in over a decade, the Browns find themselves in the thick of the AFC playoff race. Now at (8-3), the Browns are guaranteed to avoid a 13th consecutive losing season.

The value of Chubb and Henry to their respective teams should not be understated. Both control the pace of the game, and both teams want to play through them. Chubb finished Sunday with 144 yards and a touchdown on 19 carries.

Is it crazy to think Nick Chubb should get some MVP votes this season?

The Browns and Titans rank first and second, respectively, in the NFL in rushing this season. Expect to see plenty of the ground game next Sunday as the Browns travel to Nashville for a pivotal Week 13 matchup with the Titans.

Following a disappointing effort last week in a loss to Denver, the Miami Dolphins aimed to bounce back this week against a winless Jets team. The Dolphins were without starting rookie quarterback Tua Tagovailoa due a thumb injury, but Miami’s offense saw little-to-no drop off on Sunday. The Dolphins cruised to victory, 20-3, thanks to a tremendous defensive performance. Miami’s defense ranks second in scoring, giving up just 18.6 points per game this season. The Dolphins also own the league’s longest active turnover streak, forcing a turnover in 17 consecutive games. No Dolphins player has had a bigger impact on defense than cornerback Xavien Howard. Howard intercepted his league-leading seventh pass on Sunday, and is quickly turning into one of the league’s best defensive players.

With the win, Miami improved to (7-4) and currently hold the AFC’s sixth seed.

Miami’s defense wasn’t the only unit to impress on Sunday. The Patriots defense absolutely stymied the Cardinals prolific passing offense in a 20-17 victory over Arizona. The Cardinals offense, which ranks second in the league averaging over 400 yards per game, was held to just 298 yards in Foxborough. Kyler Murray was unable to get much going, finishing with just 201 total yards, zero touchdowns, and an interception. This is the first game all season that Murray has not scored two or more touchdowns. New England remains in the hunt at (5-6), standing at 10th in the AFC. The Patriots will travel across the country to face the (3-8) Los Angeles Chargers next week for another pivotal game with potential playoff implications.

The NFL’s unquestioned worst division has a new leader after Sunday’s action. Washington’s dominant 41-16 victory over Dallas on Thanksgiving gave them a brief division lead at (4-7). But the Giants’ 19-17 victory over the Bengals puts them in first with the same record. New York swept the season series with Washington, thus giving them the key tie-breaker. At (3-6-1), the Eagles can switch the lead back in their favor with a win tonight against the (7-3) Seattle Seahawks. The Cowboys, meanwhile, stand at fourth in the division and last in the conference at (3-8). With five games remaining, the division is still very much up for grabs for all four teams.

In New York’s win over Cincinnati, Giants’ quarterback Daniel Jones left the game in the 3rd quarter with a hamstring injury. Jones said he was unable to run and throw effectively, but doesn’t believe it’s a long term injury.

The Giants have a road date with the Seahawks next week, as Jones’ status remains in question.

Tonight, the NFC West-leading Seattle Seahawks will travel east to Philadelphia to take on the Eagles. Our coverage will begin tonight at 7:30 p.m.

As of now, the (10-0) Pittsburgh Steelers are scheduled to face the (6-4) Ravens on Tuesday night. A game that was originally scheduled for Thanksgiving was postponed to Tuesday due to Baltimore’s COVID-19 outbreak.

Will Levenson is a Journalism and Sports Media major at UF. He produces daily shows for WRUF, including "Sport Scene with Steve Russell," "Harp on Sports," and "The Tailgate." In addition, Will provides weekly sports updates for WUFT News and radio Sportscenters for WRUF radio. Will has been a writer at ESPN Gainesville since September 2019.
@BigWillLevenson
Previous Vanderbilt makes history with Sarah Fuller then fires HC Derek Mason
Next Mullen, Gators shifting to Tennessee