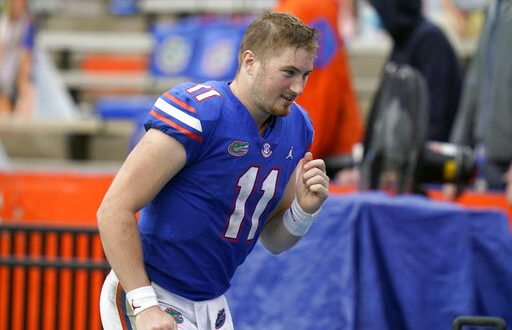 All it takes is one.

That being the magical number of wins until the Florida Gators Football Team clinches the SEC East for the first time since 2016.

It has been a tumultuous but exciting season for the Gators, and it will all pay-off with a win Saturday against historical foe Tennessee. Heisman hopeful Kyle Trask spoke with the media Monday. The senior quarterback discussed what a trip to Atlanta means. 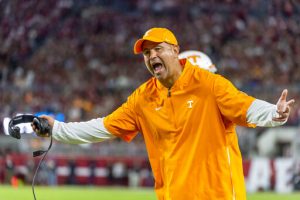 FILE – In this Oct. 19, 2019, file photo, Tennessee head coach Jeremy Pruitt yells at the officials during an NCAA college football game against Alabama in Tuscaloosa, Ala. Pruitt heads into his third season with the Vols’ first appearance in The Associated Press rankings since Sept. 10, 2017. (AP Photo/Vasha Hunt, File)

To punch their ticket to Atlanta, the Gators will have to go through a familiar foe Saturday. At 2-5, the Tennessee Volunteers don’t have much more to play for this season. Yet, with head coach Jeremy Pruitt coaching for his job, a potential challenge could be on the way for Florida.

Arguably, there is nothing more important to the Vols than knocking their heated rival out of the College Football Playoff race. In turn, knocking Kyle Trask out of the Heisman race.

While Tennessee’s season has been dismal, to say the least, there is still a legitimate threat to the Gators Saturday. The Vols have racked up 155.0 yards per game on the ground this season, which presents a challenge to Florida’s 44th ranked rush defense. Eric Gray leads a two-headed monster for the Vols with 631 yards and 4 touchdowns.

However, if Tennessee is to shatter Florida’s hopes, they’re going to have to shut down Florida’s high octane offense. The Gators rank 10th in the nation with 509.2 yards per game and have yet to let any opponent slow their tempo. In 2019, Trask tossed for 293 yards and 2 TD’s in route to a 34-3 romping of the Vols.

Trask looks to improve off of last year’s performance, as this season alone the senior quarterback is averaging 351.3 yards per game. Trask discusses his offensive approach below.

If the Florida Gators win Saturday, they will clinch their 13th appearance in an SEC Championship game. Bearing anything drastic, the Gators would take on cross-divisional foe Alabama, the number one team in the country.

For Trask, this game is another opportunity to further his Heisman case. Trask currently leads all players in the nation with -125 Heisman odds(-110 last week). While Trask has publicly shut down any anticipation of College Football’s most prestigious award, it’s difficult to not keep an eye on the situation.

The Florida Gators take on historical rival Tennessee Saturday at 3:30 p.m. Follow along on WRUF for live coverage of the game beginning at 11:30 a.m.

Sam Petosa is a Journalism major pursuing a Specialization in Sports and Media at UF. The South Florida native produces daily shows for WRUF, including "Sport Scene with Steve Russell, and "The Tailgate." In addition, Sam provides weekly sports updates for WUFT News and radio Sportscenter's for WRUF radio. Sam has been a writer at ESPN Gainesville since January 2020.
@sampetosa5
Previous James Houston is Ready for Tennessee
Next The Rivalry Continues: Gators vs. FSU Women’s Basketball

NIL is finally here, and NCAA student-athletes, like Gators, are free to cash in on …