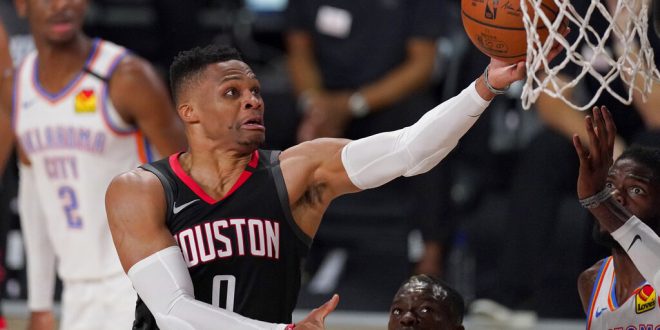 Houston trades Westbrook to Washington for Wall in blockbuster trade

The Houston Rockets traded Russell Westbrook to the Washington Wizards for John Wall and a first round pick, late Wednesday night.

Houston has agreed to trade Russell Westbrook to Washington for John Wall and a first-round pick, sources tell ESPN.

Wall, 30, has sustained multiple major injuries throughout his career. Most recently, Wall tore his Achilles in 2019, which sidelined him for the entire season. He joins James Harden and Clint Capela in Houston.

Westbrook, 32, is a former MVP and triple-double machine. His abrupt departure from the Rockets ends a tumultuous one season with the team. He averaged 27 points and seven assists with the team. Westbrook joins a Wizards team that finished 25-47 last season and picked in the lottery in the recent NBA draft.

The teams made the deal amid talks regarding both team’s superstars wanting to leave. Harden in Houston has expressed wanting a change in scenery, and Bradley Beal in Washington has one year left on his contract. This deal is an attempt to appease Harden, Wojnarowski said on ESPN.

The former NBA MVP wants a trade from the team, according to multiple reports. The Rockets have had lackluster finishes to seasons during Harden’s years under max contract. Most recently, Houston lost to the eventual NBA champion Los Angeles Lakers in the Western Conference Semifinals 4-1.

Wall, Wojnarowski said on ESPN, wants to be with the Rockets. The former Kentucky guard and NBA All-Star could be an upgrade at point guard for Houston in their system compared to Westbrook.

Beal, 27, has been with the Wizards his entire career since 2012. The former Florida Gator and NBA All-Star has been the topic of trade rumors, but has never formally requested a trade from the team. Westbrook will join him in Washington to try and get Beal to re-sign with the team next offseason, Wojnarowski said on ESPN.

Steven Walker is a beat writer for ESPN Gainesville and is currently studying Journalism & Sports Media at the University of Florida.
@swalker_7
Previous Gators Start the Season 2-0 at Home
Next Steelers Remain Undefeated After Topping Ravens