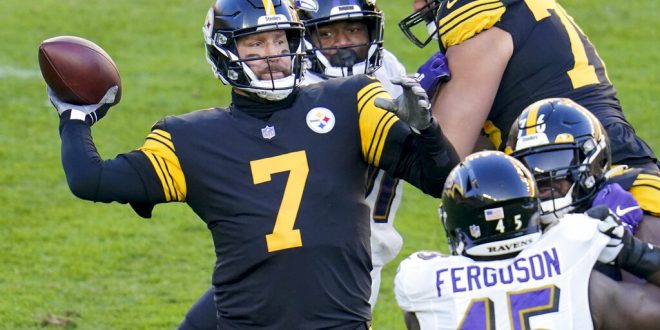 In a rare Wednesday night NFL game, the Pittsburgh Steelers survived their division rival, the Baltimore Ravens (6-5), in a 19-14 game to stay unbeaten in 2020. While Pittsburgh may have won the game, there is concern about their performance against a depleted Baltimore team and a huge piece of their defense may be lost for the season.

Another one for the win column. #HereWeGo pic.twitter.com/dbVJFA2PDH

Coming into the game the Steelers defense ranked first in the league in turnovers (21) and they took full advantage of a back-up quarterback. Baltimore’s starting quarterback Lamar Jackson and nine other starters out for the Ravens due to COVID-19 cases in the past two weeks. Back-up quarterback Robert Griffin III stepped in to start for only his second time in three seasons. Griffin’s first three drives, to be polite, were not very good. The offense earned eight yards in those drives and turned the ball over twice. Griffin fumbled in his second drive and then responded the next drive throwing a pick six to Pittsburgh’s Joe Haden.

The Steeler’s defense let up just 219 total yards to the Ravens offense. Sixty-three of those yards were from RG3 scrambling out of the pocket. The defense kept Baltimore out of the game up until the fourth quarter.

Ravens’ Trace McSorley coming in for an injured RG3 wasted no time tossing a 70-yard bomb to Marquise Brown for a touchdown. The touchdown throw made the game a five point difference but the Steelers offense ran out the rest of the clock so the Ravens did not have another chance at scoring.

Wednesday was the fourth game in a row the Steelers’ defense let up less than 20 points. However against a Ravens team without their starting quarterback, top two running backs, a tight end and a few offensive lineman, the defense was expected to perform. While the Steelers’ offense, despite a weakened Ravens defense, struggled.

Baltimore’s top 10 defense in turns of total yardage was missing significant pieces in Calais Campbell, Pernell McPhee, and Matthew Judon. Ben Roethlisberger and his many receivers were expected to blow the Ravens out.

In the first quarter, Pittsburgh kicked a field goal and threw an interception on three and a half drives. That does not take into account the fumbled punt returner handing Baltimore the ball on the 16-yard line which led to a touchdown.

Starting Pittsburgh running back James Connor out for the game left a huge whole in the ground game. Benny Snell led the team with 60 yards on 16 carries. The game was tight going into the second half. The Steelers up 12-7 left the game wide open. They scored a touchdown and the rest of their drives ended in punts or a turnover on downs.

In four games against teams with a record over 0.500, the Steelers accumulated 1,200 yards, six touchdowns and four interceptions. That doesn’t look good for them as they face the Bills and Colts in their last five games and heading into the playoffs. The Chiefs are also right behind them fighting for the number one seed in the AFC. However, the Steelers still have a shot at being the third undefeated team in NFL history.

Dupree Likely Out for the Season

Star Steelers’ outside linebacker Bud Dupree likely tore his ACL, his season might be over. Dupree tied seventh in the league in sacks (8) behind teammate TJ Watt at the top of the list. There are plenty of other pieces on this defense but it will have a huge impact. In a game many considered an easy win for the undefeated Pittsburgh Steelers comes at a price.