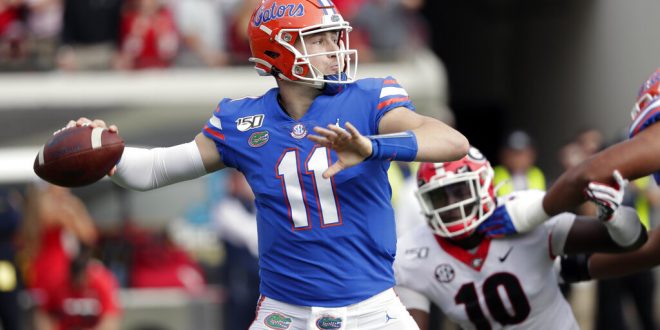 As Florida earned its sixth straight victory on the year, quarterback Kyle Trask proved once again why he’s a Heisman favorite. The Gators’ football team led by the Heisman candidate clinched the SEC East after routing Tennessee 31-19. Florida not only took down their rivals but secured their date to the SEC Championship in the process. UF will travel to Atlanta to face the SEC West champion, favorably the Alabama Crimson Tide, on Dec. 19.

Given the shortened college football season, Trask has posted massive numbers in the stat column. After tossing four touchdowns and passing for 433 yards in a win over the Volunteers, Trask was awarded the Walter Camp National Offensive Player of the Week. He became the first Gators’ football player to win a Walter Camp player of the week since Jonathan Greenard in 2019.

With an outstanding 38 touchdown to 3 interceptions ratio, Trask leads the FBS in touchdown passes and moves one touchdown pass away from tying Danny Wuerffel’s single-season record of 39 (1996).

Trask joins a list of legends as he became one of four QBs to eclipse 3,000 passing yards. Only Rex Grossman, Danny Wuerffel and Tim Tebow have surpassed that number. With two games remaining on the schedule, Trask will have the opportunity to break Grossman’s 3,896 passing yard record (2001).

In an interview with the Gators’ signal caller, Trask was asked if there was any chance he returned to UF next season instead of declaring for the NFL Draft. In response he stated,

“You know right now I’m not really thinking that far ahead. I’m just taking it one game at a time and I’ll cross that bridge when I get there.”

Although the star-studded QB is certainly in the mix for the Heisman trophy with some even considering him the front runner, he is not one of the top quarterbacks in college football heading into the 2021 NFL Draft. Clemson generational talent Trevor Lawrence, dual-threat QB Justin Fields from Ohio State, and Trey Lance out of North Dakota State are the top 3 quarterback’s on ESPN’s Mel Kiper’s big board for 2021. Kyle Trask sits at N0. 4, with BYU prospect Zach Wilson listing at No. 5.

The LSU Tigers head to the Swamp Saturday night where Trask looks to sign, stamp and seal his campaign for the Heisman trophy. However, the SEC dual in Atlanta between Trask and Mac Jones, who currently leads Heisman trophy odds at -135, will ultimately decide which quarterback will take home the honor as the best player in college football.

Angel is a student at the University of Florida. She is a Multimedia Journalist who is currently a Sports Reporter and Writer at ESPN Gainesville. Follow her on Twitter (@angelcwells) and Instagram (@angel_wells). Be sure to follow her NFL Twitter account to stay up to date with the latest NFL news. (@UpToDate1NFL)
@angelcwells
Previous Gators Tackle Stone Forsythe Comes Full Circle
Next Pitts- A Matchup Nightmare