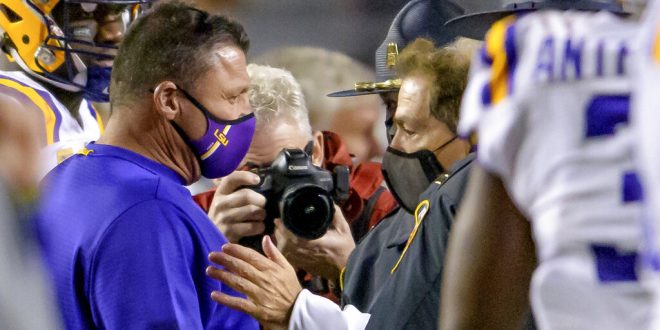 A year after going undefeated and winning the National Championship, the LSU football program is self-imposing a one-year bowl ban originating from the NCAA’s investigation into improper booster payments to the program.

The school announced the ban Wednesday night. Even in midst of a (3-5) season, the Tigers can still be considered as bowl eligible in terms of record.  The NCAA put in a rule waiving bowl eligibility requirements to give greater flexibility with COVID.

LSU has self-imposed a postseason ban for this year, the school has announced. The team now won’t be eligible for a bowl game this season.

“I respect the university’s decision to proactively address NCAA issues from the past,” Ed Orgeron said in a statement.”

In addition to the investigation regarding booster money, LSU’s football program is charged with a Level III violation. This is in connection with former Tigers star and Cleveland Browns wide receiver Odell Beckham Jr. The Tigers also received other punishments which included a loss of eight scholarships over two years, a reduction in recruiting visits and a two-year ban for Beckham from LSU’s football facilities.

Beckham’s ties to these allegations stem from him giving out $2,000 to Tigers players on the field after winning the National Championship on Jan. 13. In fact, the allegations made against the football program are part of a larger inquiry against the LSU athletics program.

The allegations against the basketball program are similar to that of football in that illegal payments were made. The only difference, this time the investigation referenced Head Coach Will Wade who handed out cash payments to potential recruits.

With the Tigers sitting at (3-5) in the midst of a disappointing season, again still eligible based on a bowl game in terms of record, the timing of this bowl ban is interesting. With LSU losing several players to the draft a season ago and some of its top talent opting out of this season, it was already going to be an uphill battle for Ed Orgeron.

In addition, the Tigers have a tough matchup on the road against the Gators this weekend. They are 23-point underdogs and continue to get inconsistent play from their quarterbacks this season. Social media felt some type of way by choosing to self-impose a bowl ban for this season.

Bold move by LSU taking a bowl ban hit this year when its 3-5 & likely to finish under .500

Regardless of how you feel about the timing, the LSU Tigers will not be playing in a bowl game. It only seems fitting in 2020 that a school likely to finish under .500 self-imposes a bowl ban. Nonetheless, the Tigers will take on the Florida Gators this Saturday at 7 p.m.

Previous Around the NFL: Week 14
Next Ole Miss Football Looks to Get Healthy