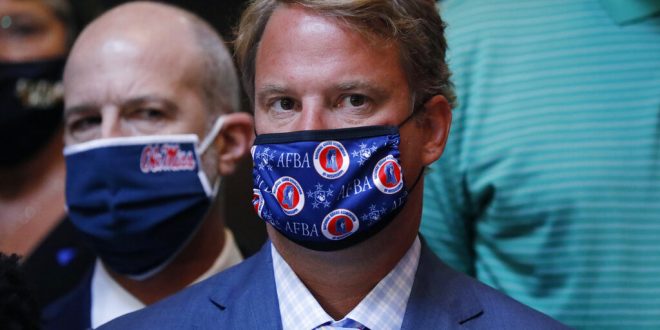 Mississippi football coach Lane Kiffin stands with other public universities coaches and athletic staffs in calling for a change of the Mississippi state flag, Thursday, June 25, 2020 at the Capitol in Jackson, Miss. Several head coaches met with both Lt. Gov. Delbert Hosemann and Speaker Philip Gunn in addition to their lawmakers to lobby for a change. This current flag has in the canton portion of the banner the design of the Civil War-era Confederate battle flag, that has been the center of a long-simmering debate about its removal or replacement. (AP Photo/Rogelio V. Solis)

With the season nearing a close, Ole Miss football is sidelined due to COVID-19. Their game against Texas A&M, scheduled for Saturday, has been postponed, as many Rebels are in quarantine.

Head coach Lane Kiffin said that there is no specific timetable for a return to practice, but they did have their first day with no new positive tests.

Other than Zoom meetings, the team is not able to gather in any fashion, according to Kiffin. He hopes that they are able to practice this week to have ample time to prepare for LSU.

It is not looking likely that they’ll play a 10th regular-season game. The SEC ruled that conference games won’t be played after Dec. 19th, when Ole Miss and Texas A&M are scheduled to play different opponents. The two were originally scheduled to play on Nov. 21, when Texas A&M had virus issues of their own.

Regardless of a global pandemic, teams with a new head coach generally don’t fare well in the SEC. Add all of 2020’s complications on top of the challenge of having a new coaching staff, and it is mightily impressive what the Rebels have done in Kiffin’s debut season.

The Rebels have been one of the nation’s most improved teams this season, sitting at 4-4 against an all-SEC schedule. Quarterback Matt Corral, a former Florida Gator commit, has thrived in Kiffin’s spread-based scheme.

They can build momentum for next season against LSU and a bowl game opponent, as Corral stated he will return. With the programs at LSU and Auburn struggling, Ole Miss could have a very strong season in Year 2 of the Kiffin regime, especially with his first full offseason at the helm.

Previous LSU self-imposes one year bowl ban for 2020 season
Next Shannon Kavanagh: The captain of the Gators lacrosse team through COVID-19