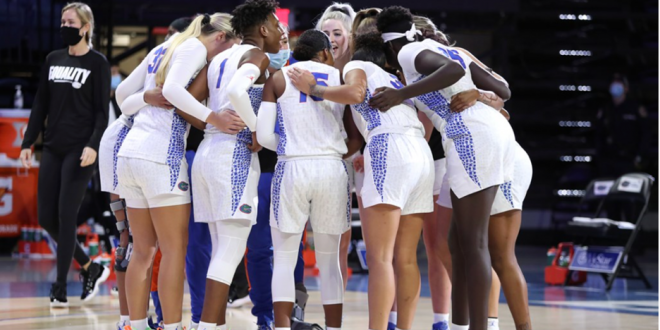 The Florida women’s basketball team (7-1) returns to play with a match up against fifth ranked South Carolina (5-1) in Columbia on Thursday. Tipoff is at 4 p.m., and the game will air on ESPNU.

The game marks both teams’ first SEC contest, but this match up was a fill-in for games postponed due to COVID-19. The Gators intended to play at Vanderbilt, and South Carolina was scheduled to host Ole Miss. The games were postponed, however, leaving an open day on both teams’ schedules.

Hot Start for the Gators

The Gators are coming into the game fresh off their best non-conference start to a season in five years, with an .875 winning percentage. Their sole blemish came in a six point loss to in-state rival Florida State. The Gators have dealt with other in-state foes, though, handily defeating FAU and North Florida.

This team’s six-game win streak will be put to the test, as Florida will see three straight top 12 teams to start SEC play.

So, what has changed for the Gators, and how will they continue this excellent season? For one, Coach Cam Newbauer’s team can score. The Gators are averaging 80.5 points and have scored 80 points in five games to this point, after doing so only four times all of last season.

These players will have their hands full against a South Carolina team that looks to repeat as SEC Champions after finishing last year’s shortened season ranked number one in the nation.

The SEC has run through the Gamecocks over the past few years. Head coach Dawn Staley has led South Carolina to the Elite Eight three times in the past five NCAA Tournaments and to an NCAA Championship in 2017.

They began December action with a bitter 54-46 loss to number eight NC State but have bounced back with two wins in which they outscored opponents by a 186-106 margin.

Staley’s Gamecock teams are known to rebound the ball well, and this team is no exception. South Carolina ranks third in the nation with 52.0 rebounds per game and a +19.2 rebounding margin. Both of these marks lead the SEC.

This team effectively combines that physicality with scoring. The Gamecocks feature three players averaging double-digit numbers in scoring and eight players who average more than seven points per game. Sophomore Zia Cooke leads the team with 17.7 points per game and ranks first in the SEC with a 55.2% 3-point percentage.

The series between these two teams is tied at 20-20. But, the Gamecocks are sporting a 12-game win streak against the Gators and haven’t lost to a Florida team at home since 2011. In other words, a Gators win would be a historic feat.

I'm a third-year student at the University of Florida passionate about storytelling and sportswriting. My goal is to work in communications for a professional sports team after I graduate.
Previous Gators Men’s Hoops Take Home Victory in SEC Opener
Next Gators Women’s Basketball Falls Short to Gamecocks in SEC Debut