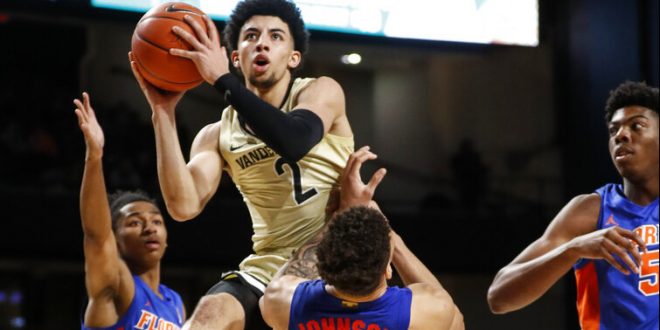 Starting the @SEC slate with a D U B.#GatorsHoop pic.twitter.com/ntCPjIyTDZ

The Gators came out of the gates strong, totaling 43 points in the first half compared to Vanderbilt’s 29. In the second half, the Commodores attempted to close the gap, but their 43 points fell short compared to the Gators’ 48.

Five Florida players ended the game in double-digit games, and all nine players that stepped on the court were on the board before the half.

Colin Castleton had a career-high of 23 points during the game and had five rebounds. This is the junior’s first season with the Gators after transferring from Michigan.

Sophomore Scottie Lewis had 16 points, five rebounds and four assists. Last season, he averaged 8.5 points per game, ending the 2019-20 season with 255 points total. So far, Lewis has earned 67 points in the five games that the Gators have played of the 2020-21 season.

Tyree Appleby walked away from the game with 13 points, his second-most points scored (as a Gator) only to the 15 that he earned against Army in the first game of the season.

Louisiana Tech transfer Anthony Duruji stepped in to fill Keyontae Johnson‘s role for the game. In his short time under coach Mike White‘s direction, the forward has already beaten most of his averages from his time at Louisiana Tech. Duruji finished the Vanderbilt game with 11 points. five rebounds, three blocked shots, and two steals. This may be turning a new leaf for the forward, as he only scored five points in the previous four games combined.

Junior guard Noah Locke had 10 points for the game; he underwent surgery in May for a groin injury but has been able to play in every game so far this season.

Tre Mann played for 33 minutes in last night’s game. The sophomore was able to put up nine points and four assists during that time. On top of that, he had a career-best 10 rebounds. Last season, Mann only averaged 1.9 rebounds per contest.

Back From a Break

The Gators have spent the past two and a half weeks away from facing any competition. Their last four games were postponed while the team and program processed and coped with the traumatic collapse of Keyontae Johnson during the Florida vs. Florida State game on Dec. 12.

Florida men’s basketball will not face another opponent until the new year. 6-1 LSU will be traveling to Gainesville on Jan. 2 to compete with 4-1 Florida.

Rylee is a fourth year journalism major with a specialization in sports and media at the University of Florida College of Journalism and Communications.
Previous Gator Football Blown Out In Cotton Bowl by Oklahoma in Season Finale
Next Gators Women’s Hoops Opens SEC Schedule with No. 5 South Carolina