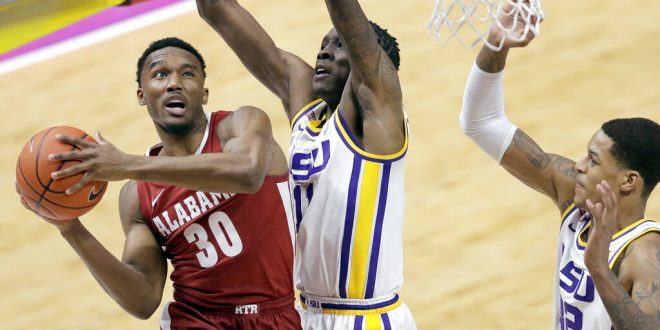 The domination of LSU by 18th-ranked Alabama continued on the court. In football, the Crimson Tide trucked the Tigers 55-17. In basketball, Bama took home the win 105-75 in regulation.

Alabama put the game away before the first 20 minutes wrapped up in Baton Rouge, putting up 60 points. LSU scored an average of 32 points in the half.

Team Effort for the Crimson Tide

No one in the game had a double-double despite the big night. However, four players score double-digit points–three scored more than 20. John Petty had the best night with 24 points, four rebounds and three assists.

Joshua Primo and Jahvon Quinerly joined Petty in the 20-point club with 22 points each. Primo also matched Petty in rebounds.

Herb Jones did not reach 20 points, but he had a balanced night with 15 points, three rebounds and five assists.

However, the highlight of the night was Bama making history. They hit a record 23 three-point shots.

Keep in mind, 75 points is a good night in college basketball. It is just not normally a blowout when a team scores that much. LSU’s defense just did not pick up any slack.

Cameron Thomas scored 21 of the 75 points for LSU, with a rebound and an assist to complement the offensive night. Javonte Smart and Trendon Watford were the only other teammates to reach double-digit points.

Record Night on the Bayou.

Set the @SEC record for made threes in a game with 2️⃣3️⃣.#BlueCollarBasketball | #RollTide pic.twitter.com/vSn4zYSlBB

Alabama will head home and have a few days off before facing the Mississippi Bulldogs. Mississippi State sits at 9-6 on the year, and they are unranked.

Meanwhile, LSU hits the road to Lexington to face Kentucky. The Wildcats are topsy-turvey season, sitting at 4-8 and unranked.

Harrison is a sports coordinator at ESPN 98.1 FM/850 AM WRUF. He served as a beat writer for Florida Gators football for the 2019 and 2020 seasons. He also contributes to WRUF's Gainesville Sports Center segments and makes appearances on the Clash on Harp on Sports. Harrison has been a content writer for WRUF since January 2019 as well.
@HarrisonSmaj
Previous NFL Scouting Combine Shifts Virtual
Next Auburn Hopes to Keep Winning in SEC Hoops