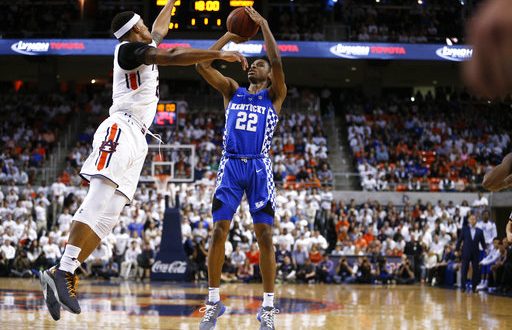 Kentucky guard Shai Gilgeous-Alexander shoots and scores against Auburn guard Bryce Brown during the first half of an NCAA college basketball game on Wednesday, Feb. 14, 2018, in Auburn, Ala. (AP Photo/Brynn Anderson)

Will the Hot Streak Continue?

Auburn Tigers’ men’s basketball escaped from Kentucky with a 66-59 comeback victory. As their win streak increases, the team hopes to continue rolling through the SEC.

Freshman guard Sharife Cooper made an outstanding season debut by scoring 11 points, eight of which came before halftime. He followed up his impressive performance by leading the Tigers with eight assists. Cooper was cleared by the NCAA to make his on-court appearance just a week ago.

Guard Devan Cambridge added 13 points to the scoreboard, five of which came during Auburn’s 9-0 run that shifted momentum away from the Wildcats.

Conversely, all nine players on Kentucky’s squad made baskets with guard Davion Mintz leading the way with 11 points. Forward Jacob Toppin complimented Mintz by scoring 10 points of his own, yet the Tigers held Toppin to just two points in the second half.

It's your time to vote!

Turnovers almost never lead to the winning outcome a team wants to see. Kentucky managed to turn the ball over 18 total times during their match up against the Tigers. The Wildcats lost possession of the ball 12 times after the intermission when Auburn began to find a rhythm and gain the lead within the final 10 minutes of the fourth quarter.

These key mistakes propelled Auburn to drain buckets from all around the arc, which eventually led the Tigers to never trailing again after a Cambridge 3-pointer that gave them a 46-43 lead.

Since exiting the starting lineup and becoming #Auburn's sixth man, Devan Cambridge is playing his best ball of the season, shooting 63% and averaging 12.3 points/game over the past week.

"He’s come back from (Christmas) break and he’s been very focused." https://t.co/7PwVaN1RHT pic.twitter.com/QebT9xzesY

Auburn basketball has now defeated the Wildcats in four consecutive seasons. The Tigers became the first team to do so since 1987-1990. Auburn now owns the second-most wins against Kentucky since 2015.

Kentucky (4-8) plans to bounce back into action with an upset win of the 8-4 Georgia Bulldogs this evening.

Meanwhile, Auburn (8-6) looks to keep the balling rolling with a road win over the unranked Arkansas Razorbacks tonight.

Angel is a student at the University of Florida. She is a Multimedia Journalist who is currently a Sports Reporter and Writer at ESPN Gainesville. Follow her on Twitter (@angelcwells) and Instagram (@angel_wells). Be sure to follow her NFL Twitter account to stay up to date with the latest NFL news. (@UpToDate1NFL)
@angelcwells
Previous Alabama Blows Out LSU by 30
Next Tiger woods has fifth back procedure