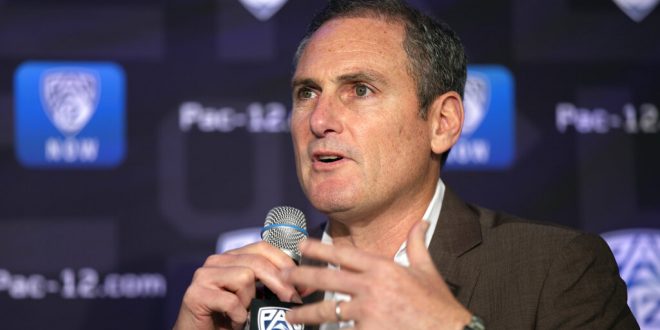 FILE - In this Oct. 7, 2019, file photo, Pac-12 Commissioner Larry Scott speaks to reporters during the Pac-12 Conference women's NCAA college basketball media day in San Francisco. Scott is stepping down at the end of June 2021, ending an 11-year tenure in which the conference landed a transformational billion dollar television deal but struggled to keep up with some of its Power Five peers when it came to revenue and exposure. (AP Photo/D. Ross Cameron, File)

The Pac-12 has been in a downward spiral for the last decade.

And now, after 11 years, the Pacific-12 conference will part ways with commissioner Larry Scott in June. The decision comes after the Pac-12 failed to produce a College Football Playoff team for the fourth consecutive season.

Larry Scott to @SINow: “There are a lot of things I could have done better along the way. … If there’s one thing I could wave a magic wand over, it’s (the TV deal).”https://t.co/VouwveSlME

“It is important that the conference be able to put in place the person who will negotiate and carry out that next agreement,” Scott said Wednesday.

The Pac-12, one of five Power 5 conferences, fell significantly behind its competition during Scott’s tenure. The conference has not won a national championship in football or basketball since 2004. Additionally, in a time where college football and big business created a symbiotic relationship, Scott and the Pac-12 failed to capitalize. In turn, the Pac-12 has arguably the weakest media rights deal of all Power 5 conferences.

Scott was a trail-blazer on negotiating conference media deals. In 2011, the Pac-12 became the first conference to announce their own network. Yet, the head start just hurt the conference. In the following years, the ACC, SEC, Big 10 and Big 12 all negotiated more lucrative television deals. Even further, the ACC and SEC now have networks backed by ESPN, with the SEC recently signing a historic extension with Disney.

Those around the Pac-12 simply believe Scott generated more revenue for the conference and himself rather than the schools itself. Questionable officiating is another stain that contributed to the competitive gap between the Pac-12 and the big boys. ESPN’s Kyle Bonagura goes in depth on the conferences decision.

For the next six months, the Pac-12 will be vetting a replacement for Scott. Many names have been speculated. Former XFL commissioner Oliver Luck is a name that has been thrown around. Luck has ties to the conference from his son, Andrew’s, time at Stanford. Alabama AD Greg Byrne is another name that comes to mind. Byrne’s time at Arizona produced some of the conference’s best basketball and baseball seasons. The strongest contender seems to be Stanford AD Bernard Muir, who has led the nations most dominant athletic program since 2012.

Whoever is hired will have work to do. In a time of name, image and likeness negotiations and new TV deals, there is more money available from college sports than ever. The Pac-12 needs a leader who will truly make them the Conference of Champions.

Sam Petosa is a Journalism major pursuing a Specialization in Sports and Media at UF. The South Florida native produces daily shows for WRUF, including "Sport Scene with Steve Russell, and "The Tailgate." In addition, Sam provides weekly sports updates for WUFT News and radio Sportscenter's for WRUF radio. Sam has been a writer at ESPN Gainesville since January 2020.
@sampetosa5
Previous Nunn scores 28 to guide Heat in win over Raptors
Next Philip Rivers Celebrated as Career Comes to An End