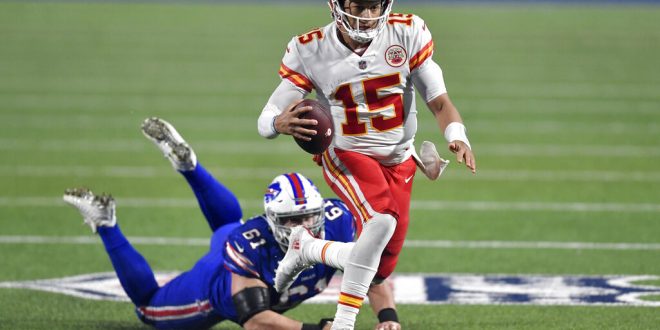 Big weekend in the NFL, the reigning super-bowl champions, the Kansas City Chiefs, take on the Buffalo Bills in an AFC Championship showdown.

The Buffalo Bills were able to hold off Lamar Jackson and the Baltimore Ravens, taking them down by points 17 and continue their longest winning streak in team history since 1994. Which was the last time the franchise appeared in the Super Bowl.

The Bills franchise is hoping their time is now. In hopes of a Super Bowl LV appearance. These two teams met earlier in the season where the Bills took down the Chiefs 26-17. Fast forward they are both preparing themselves to battle it out for the AFC title game.

Last time matching up against the Chiefs, the Bills game plan was to slow down quarterback Patrick Mahomes and Tyreek Hill, but with trying to stop that, the Chiefs looked to their other game options.

The main task at hand for Bills will be trying to slow down the Chiefs’ run game. The Chiefs offense is so complex they have both pass and running fire power.

Bills quarterback Josh Allen has to have a heck of a game. In addition, Stefon Diggs, a top rushing wide receiver, will likely play a major part in the Bills successful offense.

The Kansas City Chiefs are looking to defend their title again in the AFC champion.

The Chiefs quarterback has been on concussion protocol after getting injured during the Cleveland Browns game. Sources say Mahomes has been cleared to play on Sunday.

The Chiefs running game may be one of their best weapons on Sunday with the combination of Tyreek Hill. The Chiefs had an outstanding game against the Bills in week six of the beginning of their season rushing for a season-high of  245 yards against the Bills.

Let’s go do what we’ve been saying all along. #RunItBack pic.twitter.com/1hejexRNWP

Winner of this game will advances to Super Bowl LV. Will the Kansas Chiefs defend their throne, tune in on Sunday.

Previous Only One Spot Left on the NFL Head Coaching Roster
Next Skaggs, No. 1 Gators Get Road Win Over No. 8 Arkansas