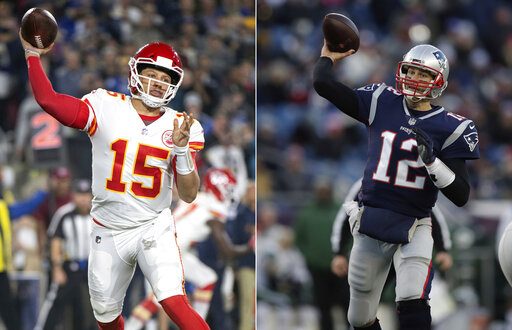 FILE - At left, in a Nov. 19, 2018, file photo, Kansas City Chiefs quarterback Patrick Mahomes throws a pass during an NFL football game against the Los Angeles Rams in Los Angeles. At right, in a Dec. 30, 2018, file photo, New England Patriots quarterback Tom Brady throws during the second half of an NFL football game in Foxborough, Mass. It seems football fans everywhere are suddenly on the Chiefs’ bandwagon, enthralled by their record-setting young quarterback and exciting offensive playmakers while hopeful that their amiable old coach can finally win the big one. Then again, maybe they’re just fans of anybody facing New England.(AP Photo/File)

Chiefs and Patriots Set to Face Off in AFC Championship Game

The New England Patriots are in a familiar position, but in an unfamiliar place as they visit the Kansas City Chiefs at Arrowhead Stadium for the AFC Championship.

Battle of the Offenses

These are two of the most prolific offenses in the league. The Chiefs own the #1 ranked offense this year, leading the league with 35.3 PPG. Kansas City also led the league in total yards from scrimmage this season with 6,810 yards.

The Kansas City offense is explosive and efficient, led by star quarterback Patrick Mahomes. The Chiefs have arguably the best tight end in the league in Travis Kelce, as well as a stud receiver in Tyreek Hill. Running back Damien Williams has done a solid job replacing Kareem Hunt in the backfield.

"I can't sit here and say Tyreek Hill is the best receiver in football. I can say there's not a single receiver in the league the Chiefs would trade him for. His once in a lifetime speed is the perfect complement to Patrick Mahomes." — @getnickwright pic.twitter.com/fDoWr54MVu

While the Chiefs’ offense is the most dangerous in the league, the Patriots’ offense isn’t too far behind. New England finished this year 4th in total offense, scoring 27.3 PPG and accumulating 6,295 yards from scrimmage.

The Patriots aren’t as explosive offensively, but they may have an advantage in their rushing attack. Behind Sony Michel, James White, and Rex Burkhead, the Patriots averaged over 127 rushing yards per game, which was the fifth highest number in the league. Last time these teams met, the Patriots took a 43-40 victory in Foxborough. New England had over 170 rushing yards in the win.

The biggest story from the AFC Championship Game is the quarterback battle. This game features an incredible match-up between the 42-year-old Tom Brady, and the 23-year-old MVP candidate Patrick Mahomes.

Tom Brady, while he might not be as quick as he used to, is still playing at an incredibly high level. He’s trying to grab his 6th Super Bowl ring and build his already impressive resume as possibly the greatest quarterback of all time.

Mahomes, on the other hand, is just getting his career started. This is his first full season as a starter, and he’s definitely made the most of it. Mahomes threw for 5,381 yards to go along with an amazing 50 touchdown passes.

This is gonna be a big part of the AFC Title game. Who wins-the @Chiefs Offense & their plan or the @Patriots Defense & their plan? Who’s gonna have the better answers? @ArrowheadPride @PatsFans #AFCChampionship #ChiefsKindgom #PatriotsNation #NFLGamepass pic.twitter.com/AjtR2g73KS

Just Another Day at the AFC Championship

The New England Patriots are about to play in their record-setting eight straight AFC Championship Game. Under Bill Belichick and Tom Brady, it almost feels inevitable that the Patriots will have a spot in the AFC Championship each season.

They have won four of their last seven appearances, and have made it to the Super Bowl in three of the last four years. Let’s see if they can add another AFC Championship to their record.

A key factor in this game is the location. Since the Chiefs earned the first seed in the AFC, the Patriots will have to travel to Arrowhead Stadium. Arrowhead is an extremely tough place for opponents to play.

The Chiefs were 7-1 at home this season, and their only loss was a last second loss to the division rival Los Angeles Chargers. Aside from the rowdy crowd, Arrowhead stadium can see some brutal weather. On Sunday, the weather is currently projected to be around 10 degrees Fahrenheit to possibly below zero.

National Weather Service is projecting an arctic blast to settle over Kansas City for Sunday's AFC Championship Game vs Patriots, reports the @AP_NFL . Temperatures at kickoff could range from 10 degrees to well below zero, making it the coldest game in Arrowhead Stadium history.

The AFC Championship Game will kick off on Sunday night at 6:40 p.m. Eastern on CBS.