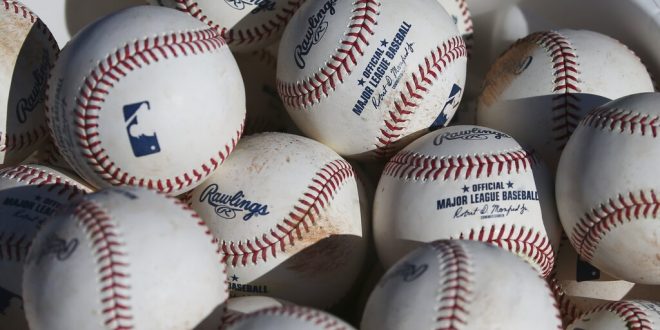 FILE - In this Feb. 14, 2020, file photo, baseballs occupy a bucket after use during fielding practice during spring training baseball workouts for pitchers and catchers at Cleveland Indians camp in Avondale, Ariz. Major League Baseball is suspending all political contributions in the wake of last week's invasion of the U.S. Capitol by a mob loyal to President Donald Trump, joining a wave of major corporations rethinking their efforts to lobby Washington. “In light of the unprecedented events last week at the U.S. Capitol, MLB is suspending contributions from its Political Action Committee pending a review of our political contribution policy going forward,” the league said in a statement to The Associated Press on Wednesday, Jan. 13, 2021. (AP Photo/Ross D. Franklin, File)

The MLB kicks off its 2021 season on April 1st, and they’re finalizing the rules now. The league informed teams on the status of a proposal for a universal designated hitter. The MLBPA rejected the proposal in exchange for an extended postseason.

MLB offered a universal DH if the union agreed to expanded playoffs. Union rebuffed the deal, which included extra money for players, so at least for now there will be no universal DH.

What Does this Mean for the MLB?

The exact parameters of the deal are unclear, but one thing to note is the broadcast rights that come along with the extended postseason. The increased revenue and rights for the league and owners outweighed the 15 potential starting positions.

“It initially suggested enacting the universal DH in exchange for the players agreeing to an expanded postseason for 2021, a concept the union rejected,” Arizona Cardinals pitcher Trevor Rosenthal stated.

This decision is also effecting how teams are approaching free agents and justifying who to sign.

Another discussion was the view of a DH being a low-skill position that wouldn’t have resulted in rampant spending.

If there’s no terms of an agreement, the only league that will have a DH would be the American League and only 10 teams would make the playoffs.

The league and the union both agree that the universal DH is a a good idea because it would prevent pitchers from injuring themselves swinging at bat or running bases.

During the 2020 season, both the universal DH and expanded postseason were implemented. This unique 60-game season differentiated from the regular 162-game season due to the Covid-19 pandemic. The postseason included 16 teams, with the top two in each division and two teams with the best records making the playoffs.

What About the CBA?

The current collective bargaining agreement is set to expire on Dec. 1, 2021. This will give the league ample time to push for an extended postseason. The MLB and the union will try to settle their unresolved issues before then. The season will play under the terms of the current Collective Bargaining Agreement as of right now.