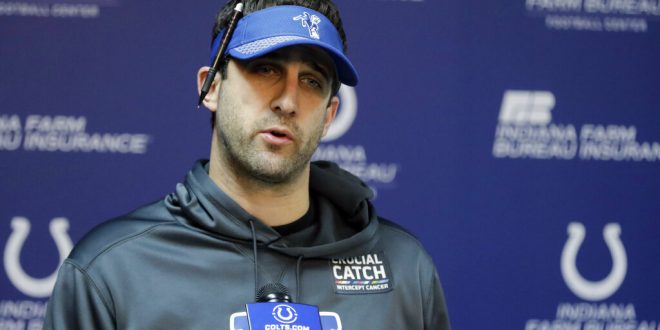 FILE- In this Wednesday, Jan. 2, 2019, file photo, Indianapolis Colts offensive coordinator Nick Sirianni speaks during a news conference at the NFL football team's facility in Indianapolis. The Philadelphia Eagles are nearing a deal to hire Nick Sirianni to be their head coach, according to two people familiar with the decision. Both people spoke to The Associated Press Thursday, Jan. 21, 2021, on condition of anonymity because the team hasn't officially announced the hiring. (AP Photo/Darron Cummings, File)

After coming finishing the 2020 season with a 4-11-1 record, the Philadelphia Eagles are optimistic about new head coach Nick Sirianni. When looking at the head coach candidates on the Eagle’s radar, Sirianni’s hiring came as a surprise. But similar to the story of Doug Pederson, Sirianni won over the Eagles’ front office staff.

Sirianni blew owner Jeffrey Lurie and general manager, Howie Roseman, during the interview process. And according to Amy Campbell, Eagles’ on-air host, hiring Sirianni should be no surprise when looking at Jeffrey Lurie’s hiring history.

When you look at the history of who Lurie hires as head coaches, he does like to hire offensive-minded guys. Sirianni has top prior offensive experience. He served as offensive coordinator for the Indianapolis Colts as a part of Frank Reich’s team. Campbell said that Lurie and Roseman went to Reich for his opinion, who gave a glowing endorsement of Sirianni.

His dynamic personality and great energy are exactly what the Eagles need for rebuilding their offense. Eagles’ fans can expect to see more rebuilding and more of a focus on young talent this season, which brings us to the next question:

Who will be under center in the 2021 season?

The quarterback position for Philadelphia is still up for grabs between Carson Wentz and Jalen Hurts, and Amy Campbell said we could see this quarterback competition going into the fall.

With the Eagles rebuilding under Sirianni, many eyes are going to be on the quarterback competition between Wentz and Hurts. Both players want to be on the field, but it will be interesting to see if both players will stay on the roster in the future.

Wentz has been the starter for the Eagles since 2016, but he lost some playing time to Hurts this season.

For now, the Eagles will wait and see what happens with the new coaching staff coming in.