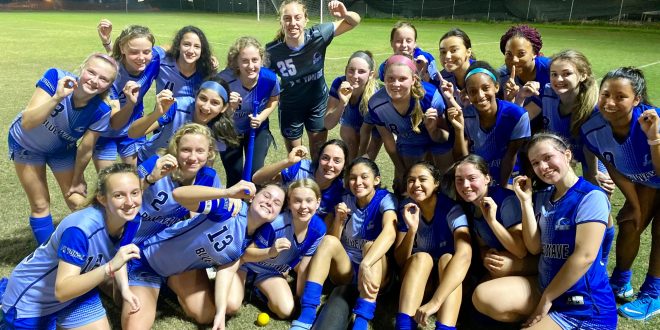 In collaboration with Alex O’Donovan

The P.K. Yonge girls soccer team (12-0-2) had yet another impressive performance on Tuesday night, cruising past Oak Hall by a score of 6-0 to bring their undefeated regular season to a close. Karuna Leslie, Faith Hardy, Juliette Palechor, and Mallory Dassa all netted goals during the relatively one-sided event.

The Blue Wave is no stranger to shutouts, as their superb defensive play and excellent goalkeeping have carried them to a whopping 10 shutout victories this season. When asked about the team’s chemistry, senior captain Megan Brown described it as “amazing.” It seems that the older, more experienced players have a knack for helping the younger players gel with the team. “I’ve been on the team for five years, [Palechor] has been on the team for eight,” said Brown. “Every time we get new players, they always feel super welcome and right off the bat they start connecting well with our team.”

The obstacles created by COVID-19 make the team’s success even more impressive. In December and early January, the Wave had a break from the action for nearly a month due to a December 16th cancellation. Upon their return, they showed no signs of being out of practice, posting an 8-0 victory against Trinity Catholic.

“[The season] was a little difficult, given the protocols” explained senior goalkeeper Chloe Maclaren, “but being on a team like this…we were really lucky. It’s nice to have something that’s consistent with the world being crazy right now.”

P.K. Yonge is poised to take the postseason by storm. When asked how she felt about districts, senior captain Juliette Palechor showed pure confidence.

“Our coach set us up for challenging games, and we have risen to the challenge,” said Palechor. “We’re going to rise to the occasion and play what we know — P.K. soccer.”

The girls will have a break, but coach Rebecca Schackow is encouraging them to keep their eyes on the prize. With a team this talented, the next goal is surely a first-place finish at the district tournament.