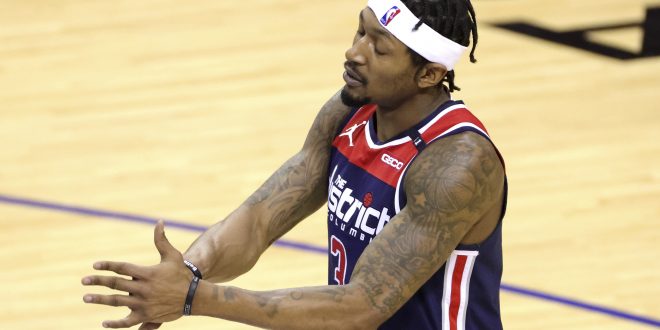 Washington Wizards' Bradley Beal reacts to a call during the fourth quarter of the team's NBA basketball game against the Houston Rockets on Tuesday, Jan. 26, 2021, in Houston. (Carmen Mandato/Pool Photo via AP)

On Wednesday night, the Washington Wizards dropped to 3-11 after an 18-point loss to the New Orleans Pelicans. Star player and former Gators guard Bradley Beal posted 47 points and 6 assists in the loss–his third 40 point game this season. After the game, a reporter asked Beal if he was frustrated with how the team was performing. He responded with “Is the sky blue?”

While Beal has been extremely efficient on the floor this year, the Wizards have not been able to catch a break. Expectations were high going into this season for Washington, with excitement surrounding Russell Westbrook joining Beal in their journey to bring Washington their first championship since 1978. Westbrook has not yet lived up to these expectations — posting a 37-percent field goal percentage, a drastic decrease from his previous production.

Then earlier this month, the team postponed six games due to a Covid-19 outbreak within the organization. Since returning to action, the team has dropped three straight, including to Washington’s previous point guard John Wall and the Houston Rockets.

Despite the disappointing start to the season, Washington Head Coach Scott Brooks still has high praise for Beal and his leadership through the struggles.

It’s become common in today’s NBA that when a star player is upset, trade rumors start to get thrown around. Beal has been with Washington since the team drafted him in 2012, and he expressed many times that he is committed to winning in Washington.

“It’s tough. I am not going to sit here and be naive… We want to win, and I want to win. This is why I stayed…I figured this is the place I can get it done … I just hate losing. And I am going to continue to show pissed-off faces. I try to control them as much as I can, but I don’t like losing.”

It seems, as for now, that Washington is not actively looking to trade Bradley Beal, but his leadership and ability to control a game is definitely noticed by other teams around the league. Teams that are currently contending, such as the Lakers, Clipppers or Warriors, could get a serious leg up with Beal on their side. It should be interesting to see how Washington responds to their slow start, and if they are able to turn it around and snag the seventh or eigth seed in a relatively wide-open Eastern Conference. If not, trade talks will likely heat up.

Bradley Beal is the first player in NBA history to lose 10 straight games when recording at least 40 points.

Beal and the Wizards will look to start their season turnaround tonight. They will host the Atlanta Hawks (9-9) tonight at 7 p.m.