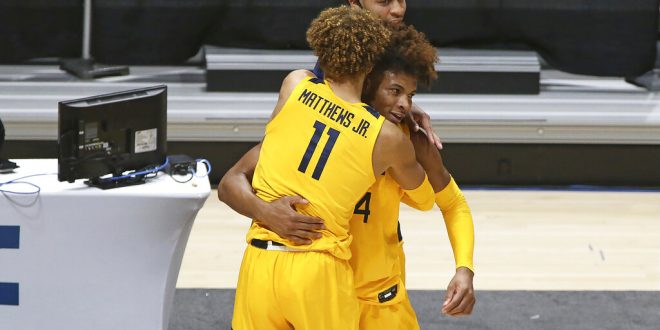 The Florida Gators (9-4) have rattled off three straight SEC wins including an upset over No. 6 Tennessee. However, they will perhaps face their toughest test yet in taking on No. 11 West Virginia (11-4) on the road in the SEC/Big 12 Challenge.

While the Mountaineers carry three conference losses into Saturday’s matchup, two of the three were to top-5 teams. Since their most recent loss to No. 4 Texas, they had three games postponed for COVID-19 issues. And then on Monday, West Virginia guard, Miles McBride stole a game from No. 10 Texas Tech on a last-second game-winner, sealing a 88-87 victory for the Mountaineers.

So, which matchups will make the difference in this game? The most significant one will be between Mountaineers big man Derek Culver and Gators breakout star Colin Castleton.

The Battle for the Paint

Since preseason SEC player of the year Keyontae Johnson’s collapse early in the season, Colin Castleton has emerged as an elite playmaker for the Gators. The 6’11” forward from Michigan averages 12.8 points per game on 23.8 minutes. He also leads the team with 5.4 rebounds per game.

On the other side of the ball is Derek Culver, the Mountaineers’ 6’10” forward who Gators coach Mike White called “one of the better interior scorers in the country.” Culver averages a double-double with 13.1 points and 10.2 rebounds per game.

The question of this matchup is whether Castleton can leverage his size advantage into points without getting into foul trouble. He and Omar Payne both battled foul trouble in the Gators’ win against Vanderbilt, with Payne being held scoreless as a result.

Possibly even more dangerous to the Gators is the player the Mountaineers line up at guard: Miles McBride.

Scottie Pippen Jr. exposed weaknesses in the Gators defending, going off for 32 points on 4-of-7 3-point shooting and 6 assists. And the Gators will have another difficult guard to defend in Miles McBride for the Mountaineers. Outside of nailing the game-winning layup in West Virginia’s game against Texas Tech, McBride led the team with 24 points and grabbed 7 rebounds and 6 assists.

White said Pippen hit a lot of tough shots, and he expects McBride to do the same. The difference he wants to see in his defense, though, is the ability to move on from giving up those shots.

He also praised McBride’s ability to get others involved and get back quickly to play defense. It’s no secret that West Virginia head coach Bob Huggins is one of the most successful coaches in the history of college basketball. But, Coach White said this specific team is unique in its ability to keep defenses busy.

Huggins and the Mountaineers

Watching Culver and McBride lead the No. 11 Mountaineers, one might think this team is playing according to plan. And they have seen success throughout the season. But, Coach Huggins actually had to make some major adjustments in the middle of the season.

First, freshman Isaiah Cottrell went down with a torn Achilles in the Mountaineers game against Northeastern on Dec. 29. The injury sidelined the four-star recruit for the remainder of the season.

Just a couple of days later on New Years Day, forward Oscar Tshiebwe entered the transfer portal. And this all came before Huggins and the Mountaineers had to sit out three games due to COVID-19 issues. So, the Mountaineers have definitely met their fair share of obstacles.

West Virginia radio analyst Jay Jacobs said Coach Huggins “has made adjustments all through his 43 years of coaching.” This year’s adjustments certainly look different from the past, but Huggins had to make some major changes to his team. Because of the loss of those two players, the Mountaineers no longer play four big men in the paint.

Tip-off is set for 2 p.m. from WVU Coliseum, and the game will be broadcast live on ESPN.

I'm a third-year student at the University of Florida passionate about storytelling and sportswriting. My goal is to work in communications for a professional sports team after I graduate.
Previous Pat Dooley’s Front Nine: January 29
Next Former Gator Bradley Beal Frustrated With Washington Wizards