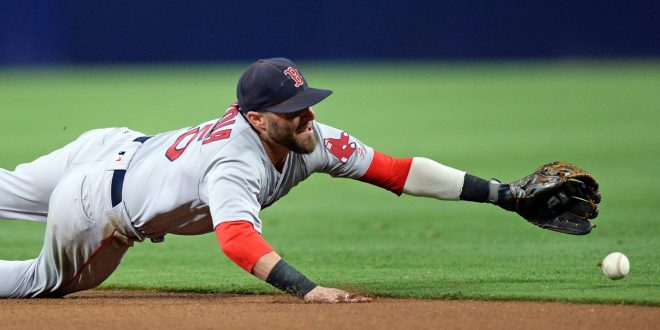 Boston Red Sox legend Dustin Pedroia announced his retirement Monday night completing a 14-year major league career. The former AL MVP spent the entirety of his career in Boston and grew to become a part of the city. Always respected for his grit and style of play, Pedroia embodied what it meant to be a Red Sox. Unfortunately, a series of knee injuries eventually spelled the end for Pedroia who will now look to begin the next chapter.

True to his city, Pedroia played like a good ole’ fashion ballplayer. Despite baseball’s changing style of play, Pedroia played a majority of games with his helmet covered in pine tar and his jersey in dirt. Largely, it was that mentality that left the Boston faithful with no choice but to accept him as their own. Pedroia expressed his appreciation for the city of Boston and the value it holds him and his family.

Additionally, Pedroia was part of the Red Sox for many of their iconic playoff runs and as a result, he will be etched in the mind of Boston fans forever.

Nobody played with more heart than Dustin Pedroia.

Pedroia was often able to fight and play through many minor and nagging injuries. That said, it was damage to his knees that ultimately proved too much. In his final years, Pedroia suffered numerous different injuries, but one in particular stands out. It was in the 2017 season during the 8th inning of a game between the Red Sox and Orioles. After a ground ball was hit to shortstop, Manny Machado slide hard into second base trying to break up the double play.

Unfortunately, Machado went straight into Pedroia’s knee. Although he immediately apologized, many viewed the slide as dirty. As a result, the Sox retaliated and hit Machado many times in the coming games. Even so, that did not do much to alleviate the damage to Pedroia.

After the incident, he only played a mere nine games and was never able to truly return to his previous form. Even so, Pedroia is at peace with the incident. He mentioned that he is no longer upset about the injury or angry about what happened.

As a player, you can’t dwell on the past. Differently, from a fans perspective, it hurt too see his career cut short.

Dustin Pedroia said the knee was so bad he couldn't even do regular every-day stuff. "The first part for me was to be able to function, to move, to walk… I couldn't even walk up the stairs." When he got replacement he realized he was going to be ok.

Far too often the case, people are not truly appreciate and recognized until they are gone. Although he didn’t often receive the praise, Pedroia served as pioneer. Specifically, he redefined what it meant to be a second baseman. At the young age of 26, Pedroia had already received honors including Rookie of the Year, Most Valuable Player and a Gold Glove. Currently, he and Cody Bellinger and the only two players in MLB history to have received those awards by that age. Additionally, he was a member of 3 separate World Series champion Red Sox teams with his most recent coming in 2018.

Pedroia stated that when considering his impact on the game, he often considers he if truly helped make others better.

Fortunate for him, he can rest easy knowing yes, this was accomplished. Pedroia’s impact will remain evident on the field and through players style of play forever.

Dustin Pedroia has announced his retirement after spending his entire 15 year career with the @RedSox.

He was the 1st player in MLB history to win Rookie of the Year, a Gold Glove, league MVP and World Series title all before turning 26.

Different from most, Pedroia is entering retirement at the age of 37. Even so, that does not change his approach to life or love for the game of baseball. Moving forward, his name will always be connected to the Boston Red Sox and MLB.

William Silverman is a sophomore at the University of Florida from Philadelphia who is interested in pursuing a career in communications and journalism.
Previous MLB Season Set to Start On Time
Next J.T. Realmuto Re-Ups With Phillies