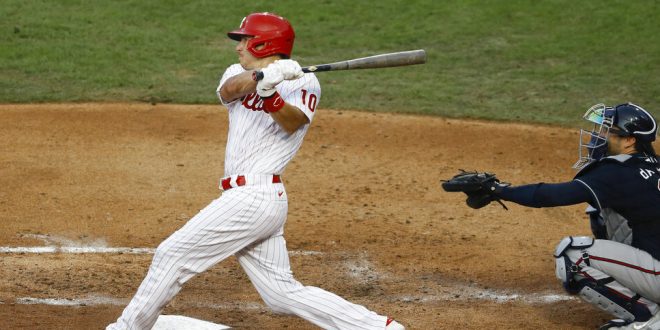 FILE - Philadelphia Phillies' J.T. Realmuto follows through after hitting a two-run home run off Atlanta Braves pitcher Robbie Erlin during the fourth inning of a baseball game in Philadelphia, in this Monday, Aug. 10, 2020, file photo. The Philadelphia Phillies and two-time All-Star catcher J.T. Realmuto agreed on a $115.5 million, five-year contract, two people familiar with the deal told The Associated Press. Both people spoke to The Associated Press on condition of anonymity Tuesday, Jan. 26, 2021, because Realmuto’s deal was pending a successful physical.(AP Photo/Matt Slocum, File)

Philadelphia Phillies catcher J.T. Realmuto has re-signed with the Philadelphia Phillies.  He inks a five year, $115.5 million deal, and becomes the highest-paid catcher ever in terms of annual salary. Playing at a position that is notorious for underpaid contracts, Realmuto made sure that his contract would be a step in the right direction for catchers to come.

Despite the monetary value of what the Phillies offered him, they also offered him a fanbase that stuck with him. After going to Philadelphia in February 2019, Realmuto played in the 2019 All-Star Game. Since arriving, the fans at Citizens Bank Park supported him; he wants to keep playing in front of them.

Due to the COVID-19 pandemic, the offseason for the MLB was less active than usual. The slow offseason was even slower because of another absence from the playoffs for Philadelphia. Despite this, Realmuto connected with Phillies management and make sure that he finalized a deal between the two parties.

Looking Ahead for Phillies

Despite the high dollar-amount, the Phillies catcher wants to see higher levels of success. The Phillies went 28-32 in 2020, four games below .500. The Phillies haven’t gone to the playoffs since 2011, so Realmuto wants to put a winning team on the field for the fans.

As of now, spring training for the MLB will be starting on time. Realmuto and the Phillies will be prepared with this in mind but will be ready to make adjustments if needed.

Carson Cashion is a second-year student at the University of Florida, and has a major in journalism with a specialization in sports and media. Originally from the Orlando area, Cashion has covered the UF Gymnastics team as well as Oak Hall athletics for ESPN Gainesville.
Previous Boston Legend Dustin Pedroia Announces Retirement
Next NCAA Football Video Game is Coming Back