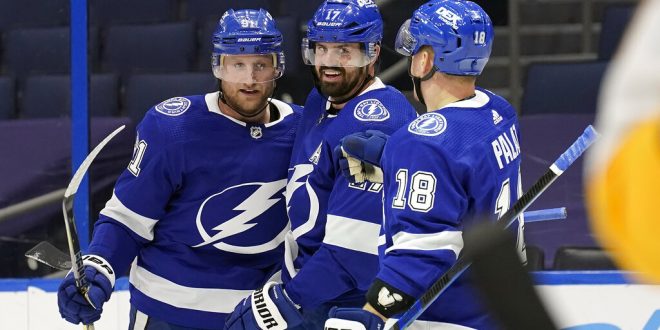 The Tampa Bay Lightning keep up their perfect home record with a 5-2 win over the Nashville Predators.

Multiple Lightning players had their moment to shine, but Yanni Gourde was the star of the night, scoring two goals. Captain Steven Stamkos had a goal and an assist for this third multi-point game of the season.

Brayden Point and Ondrej Palat also scored for the Lightning, while Andrei Vasilevskiy made 25 saves.

The first period showcased the Lightning’s offensive prowess with the team combining for three goals.

Palat got the scoring going for the Lightning, earning his team-high, fourth goal of the season, with Stamkos on the assist. Gourde picked up his first goal of the night with a tip-in off a pass from Tyler Johnson.

And just when it seemed as the first period would end 2-0, Point extended Tampa Bay’s lead with a buzzer-beating goal off a pass from Mathieu Joseph.

After four Predator penalties to begin the second, Stamkos scored his own goal on a power-play to put the Lightning up 4-0.

The Predators did not go down without a fight though. Nashville began the third with two quick goals. Eeli Tolvanen picked up the first goal with a perfectly placed shot that rendered Vasilevskiy pretty much useless. It was also Tolvanen’s first goal since December 2018.

Nashville struck again just a few minutes later. This time the goal came from Mikhail Granlund who captured control of a loose puck. Gourde rounded out the game for the Lightning with an empty-net goal coming with just 16 seconds left.

With the power-play goal in the second, Stamkos broke the franchise record for most power play points with 301. This put him ahead of forward Marty St. Louis. Stamkos leads the team with nine points (four goals, five assists) in seven games.

“These (records) to be honest you don’t really know until they put it up on the scoreboard during the game and the guys start congratulating you,” Stamkos said of the power play mark. “The bigger ones you are obviously more aware of, but that one’s pretty cool. Anytime you are up in the record books with Marty and Vinny (Lecavalier) that means I’ve been here a long time and fortunate to have a lot of success. Hopefully there’s more power play points to come.”

The Lightning will remain at home and welcome the Detriot Red Wings on Wednesday. Detriot sits in last place of the central division and has dropped its last six games. this will be the first of a two-game series and the first time these teams have met this season.

Start time for Wednesday’s matchup is set for 7 p.m.

Previous Rams in win-now mode, trading for Stafford
Next Heat Fall to Hornets in Overtime