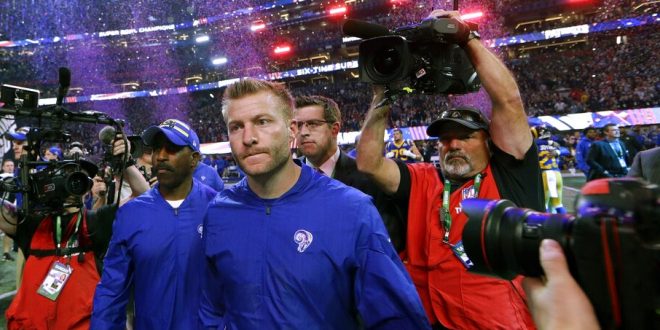 The Rams felt they were missing one key piece, following their 13-3 Super Bowl LIII loss to the Patriots: a quarterback.

Los Angeles secured its franchise quarterback Saturday night in Matt Stafford, hoping he will aid the Rams in their attempt to hoist the Vince Lombardi Trophy.

The Rams reporter for ESPN Lindsey Thiry summed up the trade perfectly. Los Angeles’ expectations are to return and win the Super Bowl.

But trading Stafford came with a hefty price tag. To pay for their new signal-caller and unload Goff’s massive contract, they surrendered a 2021 third-round draft pick and their first-round selections in 2022 and 2023.

Their next first-round draft choice isn’t until 2024, seven years since their last selection in the first round.

Los Angeles pushed the rest of its chips to the middle of the table Saturday night. In 2020, the Rams conceded their 2020 and 2021 first-round picks when they acquired former Jacksonville Jaguar Jalen Ramsey.

General manager Les Snead and head coach Sean McVay believe their time to pounce is now because their window to win a title is closing. The two-time AP Defensive Player Aaron Donald and two-time All-Pro Jalen Ramsey are nearing the end of their prime at age 26 and 29, respectively.

“This is a move McVay wanted to happen as he grew tired and frustrated with Jared Goff,” she said. “This is the quote on quote quarterback he wanted.”

Stafford is a significant upgrade over the former 2016 No. 1 pick that should elevate Los Angeles’ chances to bring home hardware before their title window closes. The former Bulldog spent his entire 12-year career as a Lion. His best year in the Motor City was in 2017 when he completed 66% of his passes, threw for 4,446 yards, 29 touchdowns and 10 interceptions.

He also put up strong numbers in his last season, completing 64 percent of his passes, throwing for 4,084 yards, tossing 26 touchdowns and 10 picks. The former 2009 No. 1 pick will also have better weaponry surrounding him in the huddle in wide receivers Cooper Kupp and Robert Woods.

What about the Rams’ future?

While going all in on winning a Super Bowl in the next few years, the Rams have hindered their future if they fail to meet their goals. The 32-year-old has already spent 12 years in the National Football League, suffering a shoulder injury in 2010 and a hip injury in 2019. They also don’t have a first-round draft choice until 2024.

With the lack of cap space, they are going to have issues keeping players and being buyers in free agency. Their starting left tackle Andrew Whitworth is about to turn 40, recovering from a brutal knee injury. So they need to potentially find a replacement for him.

It’s boom or bust for Los Angeles. And only time will tell how this trade stacks up in two or three years now.

Zachary Huber is a senior journalism student specializing in sports media at the University of Florida from Jacksonville, Florida. He works at The Alligator, covering gymnastics and volleyball while working at ESPN Gainesville. Follow him on Twitter @zacharyahuber.
@@zacharyahuber
Previous Rams and Lions Swap Quarterbacks in Blockbuster Trade
Next Lightning Remain Perfect at Home