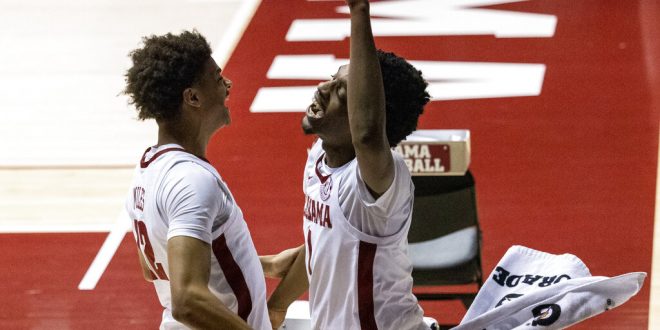 All it took was a return to conference play for Alabama to resume its winning ways.

With a 78-60 win over LSU Wednesday, the Crimson Tide move to 10-0 in SEC play. LSU, drops to 11-6 with a 6-4 record in conference play. This result comes after Saturday’s Big 12-SEC Challenge, where the Crimson Tide lost their first game in a month to Oklahoma. Alabama sits at No. 10 in the AP Poll, whereas the Tigers remain unranked with a matchup against No. 22 Florida looming.

A Game of Runs

Alabama held a six point lead heading into halftime. After Saturday’s loss to the Sooners, coach Nate Oats had his team ready to play in the second half. The Crimson Tide began the half on an 11-2 run, where the top-ten team eventually buried the Tigers. Alabama’s bench outscored LSU’s 30-2.

Alabama’s response was fueled by sophomore guard Jaden Shackelford. The California native posted 19 points, shooting at 43.8% in 19 minutes. Additionally, the team’s leading scorer with 13.8 ppg went 4-4 from the line. On a night where senior John Petty only posted six points, Shackelford’s performance was needed. LSU guard Cameron Thomas led all scorers with 22 points.

Selection Sunday is soon, and both teams look for a spot in the NCAA Tournament. Alabama currently sits at No. 8 in the NET Rankings (NCAA Evaluation Tool). If the Tide keep at this historic pace, they look prime for a top three seed in the big dance. Not bad for a “football school”.

LSU on the other hand remains on the bubble. The Tigers sit at No. 43 in the NET rankings. With 32 teams receiving automatic-bids to the tournament bubble in Indiana, LSU’s chances are dwindling for an at-large bid. The Tigers’ upcoming stretch is crucial, beginning with Saturday’s game against No. 22 Florida.

Alabama checks in as a two seed in the latest Bracketology from ESPN analyst Joe Lunardi. With an SEC Championship to its resume, the Crimson Tide can contend for a No. 1 seed. LSU remains on the bubble, sitting as a No. 11 seed per the latest projections. Lunardi has LSU as one of the last four byes in the tournament.

Alabama, now 10-0 in conference play, has a massive opportunity Saturday. The Tide travel to Colombia to take on No. 18 Missouri. This is another opportunity to gain a quadrant 1 victory for Alabama along with redeeming themselves under the national spotlight. With a convincing win Saturday, chatter about the Tide getting a No. 1 seed will begin to linger.

LSU looks to avenge its early season loss to Florida Saturday. The Tigers host the No. 22 Gators in Baton Rouge. Florida won a narrow 83-79 game on Jan. 2, with Cameron Thomas leading all scorers by posting 28 points. On that day, Gators forward Collin Castleton posted a breakout performance with 21 points in route to his first SEC Player of the Week. The Gators are coming off a crucial loss to South Carolina, losing 72-66 Wednesday. Both teams desperately need a victory as Florida looks for the season sweep on Saturday.