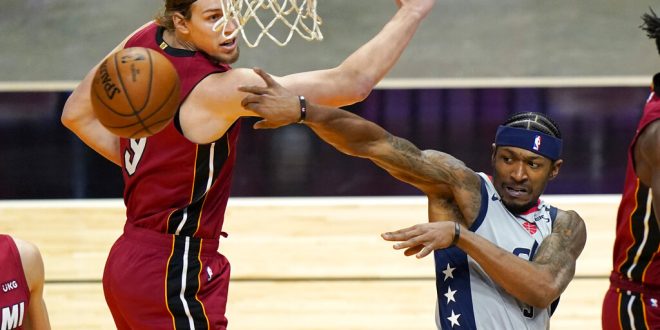 Former Florida Gator and current Washington Wizards, Bradley Beal, broke a Michael Jordan record dating back to 1988. The guard now ranks fifth all-time with his slew of consecutive games with at least 25 points.

While the Wizards are struggling this season none of the faults have been on former All-Star Bradley Beal. Beal is averaging 34.8 points on 48.5 percent from the field as well as dishing 4.6 assists. His hot streak continued last night against the Heat as the Wizards were able to rally in the fourth quarter and secure the victory in Miami. Beal dropped 32 points in the win to continue his consecutive game streak of at least 25 points to 17 games. He surpasses Michael Jordan’s 1988-89 season for the most consecutive 25 point games to open the season since 1976-77.

If the Florida alumni were to score 25 or more in four more games he would surpass Lakers’ legend and Hall of Famer Elgin Baylor to move to fourth all time. As of now, Beal sits at fifth all-time behind the likes of greats Elgin Baylor, Rick Barry and Wilt Chamberlin. In order to break Chamberlin’s all-time record, Beal would need to score 25+ for 63 straight games. A record that has stayed intact for over 50 years. The famous 1961-62 season showcased a Chamberlin averaging an astonishing 50.4 points per game and 25.7 rebounds, as well as his famous 100 point game.

In addition to Beal making NBA history on his Wednesday night, he also made Wizards’ history on his 15th point by becoming the second player in team history to score 12,000 points right behind Wizards’ legend Elvin Hayes. Hayes scored 15,551 points when Washington was the Bullets.

The (5-13) Wizards are on the outside looking for a playoff spot right now sitting at 14th in the Eastern Conference standings. If the Wizards are going to try to turn around their season it’s going to be on the shoulders of Beal.

Ethan Sanabria is a second-year telecommunications student on the digital film and television production track at the University of Florida's College of Journalism and Communications. He has previously worked as a broadcaster for the Florida Flight basketball team and currently helps the production of WUFT news facebook lives. You can reach Ethan on any of his social media or at Ethansanabria@ufl.edu.
@ethansanabria
Previous Payton likes Saints’ direction, quarterbacks
Next Jacob Young Talks Florida Baseball Season