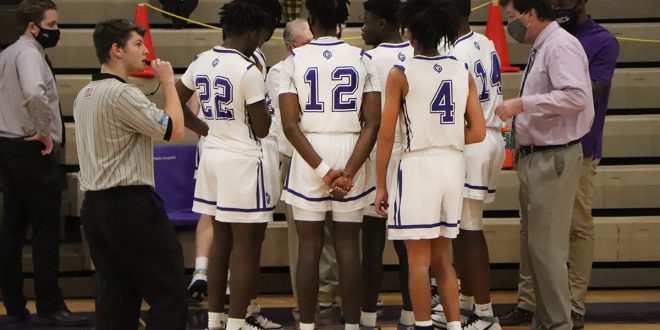 The Hurricanes reconvene in one of many timeouts. Photo by Faith Buckley.

It is finally time again for Boy’s district high school basketball tournaments and there’s plenty of action around town for everyone to catch.

Buchholz vs Gainesville – District 2-6A

The Buchholz Bobcats will face off against their city rivals in the Gainesville Hurricanes. The two teams split their regular-season series, so this one will decide who takes the season.

The Bobcats went 8-9 this season by finding momentum late in the season and winning five of their last six matchups. The Hurricanes finished 9-11 and went 2-4 in their final six games of the season. However, this did include a big 75-73 triple-overtime win on the road at Newberry.

However, those last six games for Gainesville all game in a six-day span after the team was required to quarantine due to positive COVID-19 tests. Following quarantine, the team only had two practices before getting back in action.

Gainesville’s head coach, Kelly Beckham knows that no matter what though, his team will need to bring an intensity to districts that he knows they have.

Tipoff for tonight is set for 7 p.m. The winner of tonight’s matchup will head to Lake City to take on No. 1 Columbia.

Interlachen vs Oak Hall- District 3-3A

The Oak Hall Eagles head on the road for their first game of district play to take on the Interlachen Rams. This will be the second time these two teams have met this season, with the Rams earning a 50-42 victory.

Interlachen finished the regular season at 14-7 while Oak Hall went 7-6. A big area the Eagles will have to limit the Rams on is steals. The Rams average over 11 steals per game and almost 34 rebounds giving them plenty of opportunity for points.

Tipoff for tonight is set for 7 p.m. and the winner will advance to take on P.K. Yonge.

The Keystone Heights Indians will take on the North Marion Colts in a neutral site playoff game tonight. This will be the first meeting between these two teams this season.

The Indians finished the regular season sitting at 9-10, going 3-3 in their last six games. This also included an overtime win on the road at Oak Hall. The Colts finished 7-9 but dropped five of their last six matchups.

Gage Stevens leads Keystone in points per game with 13.5, while Bryson Channell has nearly four steals and three assists per game. Sammie Yeaney is the Colts’ leading scorer with just over 12 points per game and Jaden Burton averages three steals per game.

Tipoff is set for 6 p.m. and will be played at Santa Fe High School. The winner of tonight’s matchup will take on Eastside.

Trenton vs Branford- District 6-1A

The Trenton Tigers defeated the Branford Buccaneers 44-30, already advancing to the next round of district tournaments. Tyler Perry led the Tigers with 15 points. Trenton advances to take on Union County today at 6:30 p.m. Trenton will also host tonight’s matchup.