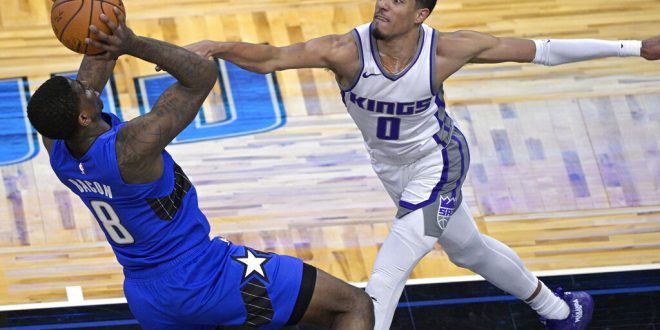 Orlando Magic forward Dwayne Bacon (8) is fouled by Sacramento Kings guard Tyrese Haliburton (0) while going for a shot during the second half of an NBA basketball game Wednesday, Jan. 27, 2021, in Orlando, Fla. (AP Photo/Phelan M. Ebenhack)

The Magic are going into Friday’s game with four injured players, including rookie Cole Anthony. Anthony strained his right shoulder during a game against the Portland Trail Blazers on Tuesday and never reentered the game. New sign-on and former Sacramento Kings player Frank Mason III will take Anthony’s place in the meantime.

Anthony had been a replacement for Markelle Fultz after a torn ACL took him out for the remainder of the season on January 6 against the Cleveland Cavaliers. He underwent knee surgery on January 20 and has been rehabilitating since then.

The Magic have taken a major hit since the early-season loss of Fultz and his temporary replacement, Anthony. The Magic had high hopes for Fultz before the season began by giving him a $50 million 3-year extension, expecting him to be a key player throughout the season. Since the Magic lost Fultz, the team has had a 3-15 record. Their record before his injury, including preseason games, was 8-4.

Evan Fournier, a Magic shooting guard, missed nine games in a row due to a lower back injury. He left the game against the 76ers on December 31 during the first quarter. He returned to the court on January 20 against the Minnesota Timberwolves after six straight losses.

Both teams are recovering from losses from this week as they prepare for their next game. The Magic ended their game on Thursday with a 111-105 loss against the Golden State Warriors. The Kings lost their game on Tuesday to the Philadelphia 76ers 119-111.

The Orlando Magic is facing an unfortunate disadvantage going into this matchup against the Kings, with star players and leading scorers recovering and cheering their teammates on from the courtside.