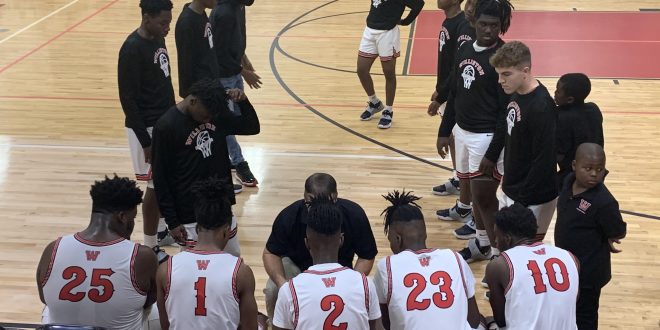 Head Coach Jim Ervin explains the game plan to his team before the game. Photo by Trey Johnson

The Williston Red Devils lost Friday night to the Hawthorne Hornets by a score of 56-54.

Hawthorne’s Dre Lawrence hit the game-winner with 1.3 seconds left on the clock to seal the deal.

Game winner tonight in the @FHSAA 1A District 7 Championship tonight. @AgentD_4 hit the nice step back jumper over the defender to seal the deal for @HawthorneHoops #Champs pic.twitter.com/DH2rtjLTP0

“I practice that a lot,” said Lawrence of his step-back jumper. Lawrence said he’s never envisioned that moment, but it was a dream come true.

As for the Red Devils, it’s back to the drawing board.

Assistant Coach Carl James said the team will be practicing free throws and learning their offensive sets in practice next week as they prepare for the regional quarterfinal.

This isolation ball led to a slow start from the Red Devils who were down 12-4 at the end of one. The team simply could not buy a bucket from the field.

They woke up in the second quarter.

After looking rattled in the first, Williston opened the second on a 13-5 run thanks to the intensity of seniors Rashaud Nelson and Keith Mcguire. Williston was able to knot the game up at 17 halfway through the quarter and took a brief lead shortly thereafter.

Nelson took a charge with two minutes left in the quarter, leading to a go-ahead three from Mcguire.

At halftime, the game was tied at 25.

The teams traded baskets for a few minutes until Hawthorne opened the game up to six by hitting back-to-back threes in the third quarter.

The fourth was even tighter than the third.

Williston was able to take a five-point lead with five minutes left in the game. The Hornets and Red Devils continued to trade baskets until Williston senior guard Jokeriyan Davis tied the game at the free throw with 1:39 remaining. Nelson would foul out 12 seconds later.

James had this to say after the game:

The rematch between the teams who went to overtime the last time they met, came down to who had the ball last.

Trey is a third year sports media major at the University of Florida, and a WRUF reporter.
@@treyboogie5
Previous No. 1 Gators Win in Photo Finish
Next Santa Fe Boys Basketball Edges Past Eastside in District Championship 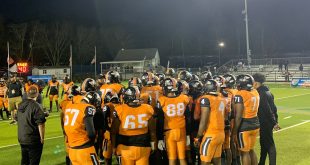 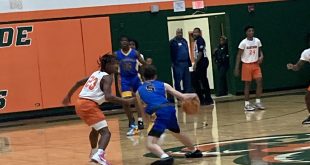