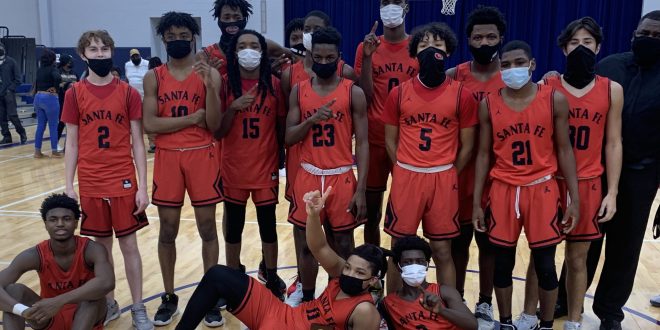 The Santa Fe Boys Basketball team (15-5) went into Friday night’s Class 4A District 5 championship against a hot Eastside High team (20-1). The Rams were on a 17-game win streak with their last loss coming against the Raiders of Santa Fe in December. That streak came to an end Friday, as Santa Fe topped Eastside 41-40. NC State commit Ernest Ross led the Raiders in both points (21) and rebounds (12).

The Raiders struck first in the contest with sophomore Dontrell Jenkins throwing an alley-oop to Ross who threw down the two-hand dunk. The momentum slowed as the Rams settled in and took the lead 10-7 at the end of the first quarter.

The Eastside Rams came out in the second quarter with an energetic defense that led to a fast-paced offense. The Rams extended their lead to 25-16 behind 9 points from senior Qua Brodus

The tide turned at the start of the second half.

The Raiders came out of halftime in a light half-court press. The strategy not only managed to slow down the Rams but gave the Raiders plenty of offensive opportunities.

Early in the third quarter, Jenkins forced a turnover for Santa Fe that Ross picked up and threw down to get the Raider fans jumping out of their seats.

This style of defense allowed the Raiders to climb back from their halftime deficit in just one quarter. At the end of the third quarter, the game was tied 33-33 with one quarter left to decide the district champion.

An Ending to Remember

With eight minutes on the clock and a district championship on the line, both teams put all their energy into finishing on top. Santa Fe quickly launched themselves to a 40-33 lead, holding Eastside scoreless for over six minutes.

With one minute and 45 seconds left in the game, Eastside finally got back on the board. Eastside senior Omar Brown grabbed an offensive rebound and dribbled the length of the court, getting the basket and the foul. Brown made the free throw to cut the Santa Fe lead in half.

Eastside continued to fight back as senior Jarveil Gainey drove into the paint and put in a contested layup, bringing the contest to 40-38 with 27 seconds remaining.

Eastside was forced to foul Santa Fe’s Dontrell Jenkins, who made the first free throw. Jenkins made his second free throw, but the Raiders were called for a lane violation, meaning the point was taken away and the Rams got the ball down by three.

The drama didn’t stop there. Eastside brought the ball down and after a series of missed three-point shots, Santa Fe grabbed the rebound. Thinking their team had just won the district title, players on the Santa Fe bench stormed the court celebrating the apparent victory.

However, the game hadn’t finished. Nearly two seconds remained on the clock and a technical foul was assessed to the Raider bench, giving the Rams two free throws and the ball.

Jarveil Gainey stepped to the line and hit both free throws, bringing the Rams within one point of the Raiders.

With just under two seconds on the clock, Eastside had the ball at half court with the chance to steal a district title. Eastside failed to get a shot off before the buzzer went off.

But the game still wasn’t over.

The clock operators failed to start the clock at the right time and the Rams were granted a second chance but unfortunately came up short again, giving the Raiders their first district championship in three years.

It feels good. In order to be the best, you got to beat the best.

Harris didn’t shy away from the critical mental errors made by his team at the end of the game saying,

“We got some stuff to clean up. We got to be more disciplined. We can’t shoot ourselves in the foot. Those are things you can’t do and we can clean up. But the bottom line is we won a district championship and we’ll take it”

The Raiders (16-5) play in the regional quarterfinal next Thursday at home.

Chris Will is a second-year journalism student with a focus in sports and media. Originally from the Fort Lauderdale area, Will is now the beat reporter for Florida Gymnastics and covers all things sports in Gainesville.
@_Chris_Will_
Previous Red Devils Lose District Championship in Heartbreaking Fashion
Next Echols Powers Gators Softball To Season-Opening Wins