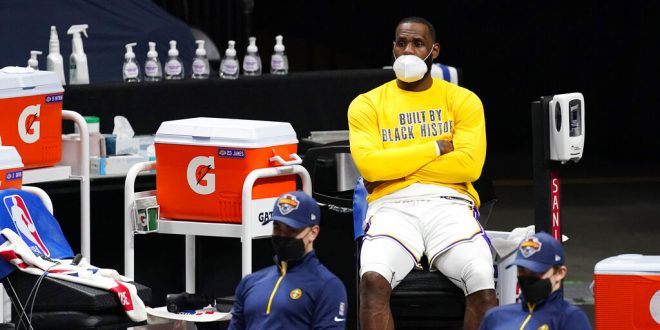 Los Angeles Lakers forward LeBron James watches during the second half of the team's NBA basketball game against the Denver Nuggets on Sunday, Feb. 14, 2021, in Denver. (AP Photo/David Zalubowski)

The NBA plans to go ahead with the All-Star Game planned for March 7, though not all are excited about the meeting.

ESPN Senior Insider Adrian Wojnarowski said in an interview, most players view the event as an obligation.

In addition to the extension to last year’s season, the NBA shortened this year’s off-season. This gave the NBA a record 71 days between 2020 and 2021.

Lebron James of the Lakers said the NBA reviving its All-Star Game after telling teams it would not happen is a “slap in the face.”

Vince Carter backs LeBron James saying the NBA's plans for an All-Star Game are a "slap in the face" to its players. Giannis Antetokounmpo weighed in as well tonight, saying he didn't want game either.
Kendrick Perkins: "it breaks the trust" pic.twitter.com/4oBYMoIk2A

James said he’s not very happy with the All-Star plans, but will still arrive if selected. “I’ll be there physically, but not mentally,” said James.

Not all players feel the same as James, however.

Cleaveland Cavaliers guard Colin Sexton said in an article with CavaliersNation.com, it would be an honor to be selected and return to his hometown of Atlanta.

“For me, it being in Atlanta, being a part of it would be a blessing for sure,” said Sexton

The NBA safety and health protocols don’t just apply to All-Star players in Atlanta. According to NBA writer Tim Bontemps and Wojnarowski, the memo limits players and guests to visit the hotel and the arena only. Guests who join players will be under the protocol and will take the same PCR tests as players.

NBA Players who won’t be in Atlanta for the game will also be under travel restrictions. These players are barred from staying in public hotels and traveling internationally.

New ESPN story with @wojespn: the NBA and NBPA have agreed to health and safety protocols governing players during the upcoming All-Star Break, including what is permitted for those participating in All-Star Weekend in Atlanta. https://t.co/4CF1QMDKBV

The game has been rescheduled for Sunday, March 7. The skills competition, three-point competition and dunk contest will take place at half-time.

Matthew Bell is a senior at the University of Florida. He completed his associates degree at State College of Florida in Bradenton and transferred to UF in 2019. His favorite sports are American football and baseball.
@@write_matthew
Previous Bolts Lose Rubber Match to Panthers
Next Gators Women’s Basketball Drops Game Against No. 20 Kentucky