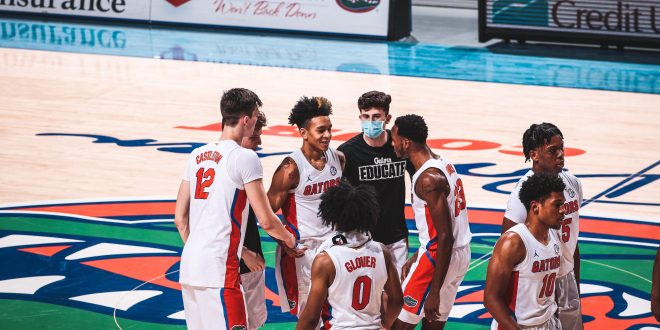 The Florida Gator men’s basketball team got back on track today with a 70-63 win over the Georgia Bulldogs.

A pretty solid first half for the Gators led way to a mediocre second half that made the game seem a lot closer than it actually was most of the time. In the first half, the Gators shot 48% while in the second half only 41%.

The threes in the second half also took a dip, starting at 50% completion in the first and not even 8% in the second.

Four Gators ended the game with double-digit points and Colin Castleton led the way with 14. Tre Mann and Tyree Appleby each had 13 and Ques Glover added 11 points.

Castleton also led the Gators in blocks with three while Anthony Duruji and Scottie Lewis each added two.

Sahvir Wheeler was the star of the show for Georgia, scoring 27 points and getting five steals.

Appleby got the game started with a corner three, but Georgia answered with a quick layup of their own. Lewis found himself in early foul trouble the last few games and this one was no different. He was called for a charge not even a minute after getting called in.

Turnovers were an early problem for the Gators, giving Georgia the ball five times in the first four and a half minutes. Appleby hit his second three of the game to get the Gators back on top 10-8.

In the next few minutes, Florida seemed to turn things around and was up by eight following a layup from Mann. The Gators’ defense seemed to be on, as they held Georgia to 3-19 shooting to start the game.

Georgia also went into a six-minute scoring drought before Wheeler scored on a layup to make the game 20-8. With just under seven minutes in the first half, Wheeler had eight of the Bulldogs’ 10 points.

With just five minutes left in the first half, Florida had blown their lead wide open following a three from Noah Locke to make it 30-12. Georgia had begun to close the gap a little, but a buzzer-beating three from Locke to put the Gators back up by 14 heading into the locker room.

Mann was the first Gator in double-digits after knocking down a three for Florida’s first points of the half. The three’s were not falling as easily for Georgia, as they started the second just 1-13 from beyond the arc.

Georgia was having trouble getting around Castleton in the paint though, so their three-ball had to step up. The Bulldogs made back-to-back threes to make it 45-34.

The Gators’ offense wasn’t as hot as the first half, starting the second shooting for just 4-13. Georgia jumped on the opportunity and went on an 11-3 run to get back within 10.

A huge dunk from Duruji followed by a layup from Castleton seemed to give the Gators the boost they needed to get back on track offensively and up by 15.

A three from Georgia, followed by a steal and layup and a jump ball, had cut the Gators lead down to eight with two minutes to play. And it would be cut to six after Wheeler grabbed a steal and Ty Fagan got the basket.

The Bulldogs never could catch all the way up though and the Gators claimed the win 70-63.

The Gators will head on the road to take on the Auburn Tigers this Tuesday at 9 p.m.