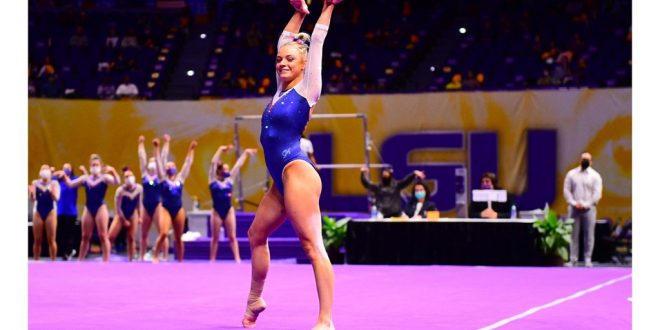 The number one ranked Florida gymnastics team entered its meet against the number 15 Kentucky Wildcats amid uncertainty; earlier on Friday, the team had announced that multiple people involved with the team were ruled unable to attend the meet due to COVID-19 protocols. In a meet just one week after their headline-stealing win against LSU, the Gators topped the ‘Cats, 197.500-196.875.

Losses due to COVID

The COVID restrictions that were announced prevented a number of both coaches and players from attending the meet at the O’Connell Center. Included were Gator head coach Jenny Rowland, Assistant Coach Jeremy Miranda, and a plethora of gymnasts: juniors Sydney Johnson-Scharpf, Nya Reed, Savannah Schoenherr, and Trinity Thomas. The four gymnasts accounted for almost 80 of the Gators 198 points in their last meet against LSU.

“It was miserable,” Rowland said. “It was so much more nerve-wracking. I was yelling, I was screaming, I think I scared my dog. It was a very unique experience, and one that I hope doesn’t happen again.”

For the players, it was a unique experience for them as well; they did not have the support of their head coach on the floor. To make up for this, seniors such as Alyssa Baumann stepped up and took a leadership role.

“I tried to step up for my teammates, knowing I was a senior,” Baumann said. “I said ‘I’m going to be Jenny Rowland for a second’ and gave them all fist bumps. It was really nice to see even the freshmen take ownership, and put up great routines without a head coach present.”

Junior Halley Taylor opened the meet up for the Gators in her first collegiate appearance on the vault. Senior Jazmyn Foberg scored a 9.800 in her first appearance in competition this season. Freshman Ellie Lazzari had the unusual role of a veteran in the vault lineup, but she performed with the skill of one; her 9.875 led the way for Florida. The highest score on the vault for Kentucky came from junior Cally Nixon, who earned a 9.850, so Lazzari also took home the event title.

Two freshmen provided solid scores for Florida to open the second rotation; Gabrielle Gallentine earned a 9.800, and Lazzari scored a 9.850, a career-high for her after scoring a 9.750 against LSU. Senior Megan Skaggs broke new ground for her career on the bars; her score of 9.925 set a new-career high for the gymnast from Marietta, Georgia. Junior Leah Clapper added on with a score of 9.875, and Baumann finished the rotation off by equaling Skaggs’ score of 9.25. This score also set Baumann’s new career high. The two gymnasts shared the event title for the night, and the Gators led 98.500-98.175 after the first two rotations.

“I was definitely nervous going into today,” Baumann said. “I got a lot of texts from my teammates saying they believed in me and knew I was ready. Once one thing started going right, it just kind of kept going and we built off of it.”

“I just felt like jumping up to the sun.”-Junior Leah Clapper

After slowly building a lead through the first two rotations, the Gators put the pedal to the metal on the beam. Sophomore Payton Richards opened the routines, posting a 9.875, and the team took off from there. Skaggs performed next, earning a 9.925, and Lazzari matched Skaggs’ score after that. In a standing-ovation worthy performance, Baumann set another career-high score, earning a 9.950 on the beam.

However, it was Clapper who stole the show; the crowd broke into a thunderous applause midway through a floor routine for the Wildcats. This was because the judges had announced that the junior from Ann Arbor, Michigan, had scored a perfect 10.000. This was the first “10” of Clapper’s career, and the performance won her the event title. Florida ended up with a score of 49.675, and this became the highest-scoring beam routine for any team of the 2021 season.

“It’s hard to even describe,” Clapper said. “Getting a 10.0 has been one of my biggest goals of being a Gator, and I honestly can’t believe it happened. I just wanted to go up there and do my best. If I ever got a 10 I would be so excited, and I got a 10 so I am so excited.”

Baumann Closes it Out 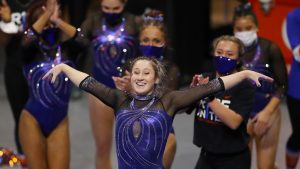 Sophomore Raena Worley earned a 9.925 in the third rotation on the floor for Kentucky. The Gators spent much of the fourth rotation trying to catch that score. Clapper got right back in action to open the fourth rotation, posting a 9.700 score on the floor. Skaggs followed Clapper and earned a 9.875. Richards, performing to the guitar strums of Tom Petty, scored a 9.875 as well, matching her season and career high. Finally, on the second-to-last floor routine of the night, Baumann stole the event title from Worley. The 9.950 she scored on her floor routine gave her the second share of an event title. In her first-ever all-around performance, Baumann took home the all-around title. Taylor scored a 9.800 to finish out the night, and the Gators had their sixth win of the season.

The Gators return to the O’Connell Center next Friday, as they take part in a rematch against the Auburn Tigers. The availability of the coaches and players away from the meet tonight has not been announced.

Carson Cashion is a second-year student at the University of Florida, and has a major in journalism with a specialization in sports and media. Originally from the Orlando area, Cashion has covered the UF Gymnastics team as well as Oak Hall athletics for ESPN Gainesville.
Previous Gator Softball Uses Big Fourth Inning to Overcome Georgia Southern
Next Gators Hold on for Win Over Georgia