The Florida Gators finished as the runner ups in the SEC Women’s Swimming Championship this past week.

Florida places Second at the SEC Championships with 1071 points! #GoGators

Florida was ranked second for the third year in a row, placing only behind Kentucky. This victory marks the Wildcats first SEC title in program history, as they ended the four-day matchup with 1,124 points. However, the competition was a close one, with Florida in first both the second and third day, but dropping to second during the final day of the championship.

Florida ended the weekend with four medals. This included the team’s only gold from competitor Ashley McCool. This senior diver scored her team 32 points by being first in the 1-meter. She also placed third in the 3-meter springboard and sixth on the platform, all helping her achieve the title Diver of the Meet.

Check out Ashley McCools' dive sequence that won her the gold last night on the 1-meter springboard at the SEC Championships! #GoGators pic.twitter.com/OyMxJdUNHF

Sophomore Talia Bates was also a note worthy competitor. She brought 26 points to the team by ranking fourth in the 200 yard freestyle.

Talia Bates finishes fourth in the 200-free and moves up to #5 on UF all-time list! #GoGators pic.twitter.com/E3GwDL04eV

Florida Sophomore Tylor Mathieu also brought in 26 points with her fourth place rank in the 500-yard free, while sophomore Katie Mack finished third in the 50-yard free bringing in 27 points.

On the final day of the competition, the Gators fell short to the wildcats after the lack of points scored during the team’s 200-yard backstroke.

“With only nine returning swimmers from last year’s SEC team and 10 freshmen or first-timers, we finished runner-up again for the third consecutive year to three different teams each time,” Florida coach Jeff Poppell said. “Although we are disappointed to come up short on the last day, it most certainly was not due to a lack of effort or improvement from this very young team. I am confident that if we keep knocking on the door, we will eventually breakthrough. All in all, it was a great week for the Gators.”

The SEC Men’s Swimming Championship will take place at the Mizzou Aquatics Center on Tuesday through Saturday. 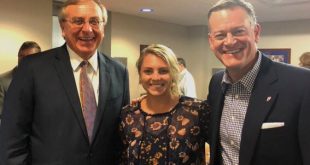