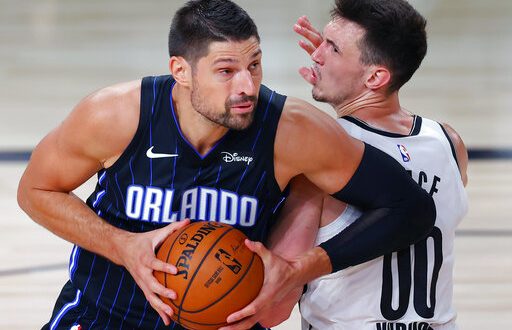 Last night, the Orlando Magic (13-18) defeated the Detroit Pistons (8-22), 105-96. This pushes Orlando’s win streak to three games. The Magic will have a  rematch against the Pistons on Tuesday and hope to sweep them at home this season.

M A G I C W I N! pic.twitter.com/mUnTHAskUk

Those three players are leading the team in scoring and all average over 28 minutes per contest. Vuc also had 12 rebounds in this contest, while Fournier filled the stat sheet with seven rebounds and assist.

This was an expected win over Detroit for Orlando, but things have been less than peachy in the organization.

Part of the reason the scoring is so lopsided in Orlando is because the Magic cannot stay healthy. Jonathan Isaac and Markelle Fultz are both starters and both out for the season. While Aaron Gordon and Cole Anthony are both unavailable at the moment for an extended period of time. The Magic front office has been scrambling trying to fill out a bench.

This photo sums up how bad the injury bug has bit Orlando. It seems like even the free agents they’ve signed this season have faced injuries.

Looking ahead, this isn’t the worst thing for the Magic. The free agents and young players they have can get quality minutes and become more dependable, quicker. This will help in the future, which I will get to about the Magic, later.

There has been one bright shining light for the Magic this year. As a matter of fact, the last three years.

One of the most underrated players in the NBA. Players know how talented he is. But from a media standpoint, he does not get the credit or exposure he deserves.

Vuc is averaging 24.1 PPG, 11.7 RPG and 3.6 APG. He has upped his scoring average by about five points from last year. Two seasons ago, Vuc was an all-star and it would be a shock if he isn’t one this year. He can stretch the defense out to the three-line or work players in the paint with his sweet post moves and soft touch near the rim. Nikola is the leader this Magic team needs. He signed a four year, $100 million contract with Orlando in June, 2019. He is the piece Orlando is building around.

The Magic are caught between getting a high draft pick and making the playoffs. As of Monday, February 22, the Magic are 13-18 and sitting at 12th in place in the Eastern Conference standings. Which seems awful, but the Magic are only two games out of the eighth seed. It would be wise for the Magic to let games slip here and there to earn a chance at a higher draft pick. But, I understand as a competitor, it’s in their DNA to keep fighting and playing hard. A healthy Orlando team is a serious contender. And as of lately, the Magic have done well picking up free agents and drafting the right players to fit into this scheme. The team is heading in the right direction, they just need to be patient and healthy.