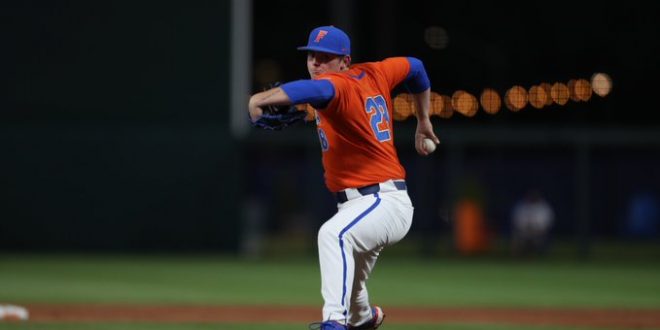 Florida Gators Baseball put freshman right-hander Chase Centala took the mound against North Florida on Wednesday night for the first start of his college pitching career. Centala was able to throw four scoreless innings for the Gators allowing only four hits and registering four strikeouts for the win against UNF.

Centala with just one hit allowed through two 👍👍#GoGators pic.twitter.com/nkeQSxqSAE

Centala made his college debut last weekend during the opening season series against Miami. Although, the pitcher did not see the same success. Last Friday, Centala was unable to make an out when he was put on the mound briefly late in the game where he was then quickly pulled out after three runs were scored on his watch.

“I don’t think I was mentally ready for that Miami game,” explained Centala. “I had so many nerves.”

For the second game of the UNF series, Centala was told right before game time that he would be starting on the mound giving him no time to work through any pre-game jitters. Although, this did not seem to phase the pitcher too much. Centala started the UNF game off with consistent strikes right away.

“I felt really good. Starting off strong meant a lot to me and was really big for my confidence,” Centala said.

Two big strikeouts from Centala to get out of the inning!

The Florida Gators will stay at home this weekend to take the field for a three-game series against Samford. First pitch is set for Friday night at 6:30 p.m.