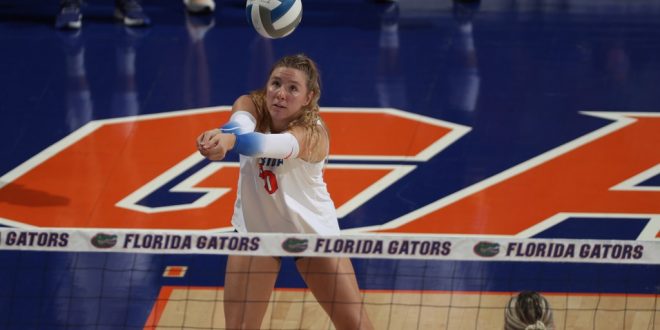 Florida Gators Volleyball brought their brooms to Knoxville, Tenn to sweep the Lady Vols in three sets with scores of 25-20, 25-18, and 25-21. The eighth-ranked Gators improved their record to 11-2 while the Vols currently sit at 6-5. In each of the three sets, the Vols grabbed a lead right off the bat but the Gators closed the gap each time and came out on top.

On offense, T’ara Ceasar led the way in kills putting down 19 with 36 attacks. Then, Thayer Hall added seven kills to the board along with 32 attacks. The success on offense can partly be credited to setter Marlie Monserez who contributed 34 assists to her offense. Up at the net, Lauren Dooley put up eight blocks and put down six kills.

On the defensive side, T’ara Ceasar also lead her team with 15 digs to accomplish her fourth double-double of the season.. In addition, Libero Elli Mckissock kept the backcourt clean with 12 digs.

Despite the loss, the Vols kept the match tight and presented a challenge. Madison Bryant lead the game in digs at 17. In addition, Morghan Fingall hit double digits in kills with 11 against the Gators defense. In Gators-Tennesee history, Florida is up 52-13 in all-time wins.

The Gators will be back on the court tomorrow to close out their series with Tennessee. The first serve is set for 1 PM in Knoxville, Tenn.

Parker Welch is a Junior at the University of Florida majoring in Sports Media at the College of Journalism & Communications.
@parkerrwelch
Previous Gators Pitcher Chase Centala Makes First Collegiate Start on the Mound
Next Gators Softball overpowers UNF