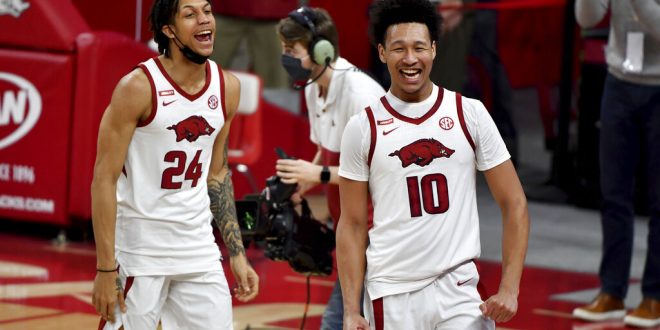 It seemed Alabama had solidified themselves at the top of the SEC. Yet, when the Crimson Tide stepped foot in Bud Walton Arena Wednesday night, all hype was left in Tuscaloosa.

No. 20 Arkansas defeated No. 6 Alabama 81-66 on Wednesday. A second half charge led by a 17-2 run proved the difference for the Razorback’s season defining win.  Now 1-1 on the season (Alabama won 90-59 on Jan. 16), the two seem destined to meet in Nashville next month.

The Razorbacks are winners of seven straight in SEC play with an out of conference loss to Oklahoma State. With their win, Arkansas now moves their winning streak to eight. All but solidifying themselves as the two-seed in March’s SEC Tournament, the Razorbacks picked up a season changing win against the Tide.

After a 39-38 first half, a down to the wire finish seemed inevitable. Yet, a 17-2 run put Alabama to sleep. Freshman guard Jaylin Williams led down the stretch, posting 10 of his 13 points during the run. Williams was one of four Razorbacks with double digits in points. Star guard Moses Moody led all scorers with 24 points and five rebounds.

After Wednesday’s win, Arkansas moves to No. 21 in the NET Rankings (NCAA Evaluation Tool). Picking up a Quadrant one win, the Razorbacks are all but guaranteed to make the NCAA Tournament. With a run in the SEC Tournament, Arkansas can improve their seeding. Alabama drops to No. 9, remaining in contention for a top seed in March’s dance.

A strong first half made the difference for Tennessee in their 70-58 win over Vanderbilt. The Volunteers led 32-22 at halftime, a mark too big for Jerry Stackhouse’s Commodores to come back from.

After losing to Kentucky on Saturday, the No. 25 Vols (AP Poll) had to come back strong against their in-state rival. Tennessee did just that Wednesday night, avoiding a two-game skid in conference play. A lieu of 20 point scorers led the way for Tennessee. Freshman Jaden Springer and Oregon transfer Victor Bailey Jr. led all scorers with 20 and 21 respectively.

The Vols move to No. 16 in the NET Rankings. With continued success, Tennessee can parlay an SEC Tournament run with a top five seed in the NCAA Tournament. While Vanderbilt may be out of tournament contention, a 38-36 second half against a ranked opponent can be a building block for Jerry Stackhouse.

Besides a win over No. 22 Florida, it’s been a down year for South Carolina. The Gamecock’s struggles were evident Wednesday, with a 69-48 loss to Mississippi State. South Carolina falls to 5-12 on the season, a far cry from the Final Four team in 2017.

Sophomore guard D.J. Stewart led all scorers with 15 for the Bulldogs. Forward Abdul Ado posted 11 points along with eight rebounds as well. Mississippi State moves to (13-11) on the season, with a (7-8) record in conference play.

Sam Petosa is a Journalism major pursuing a Specialization in Sports and Media at UF. The South Florida native produces daily shows for WRUF, including "Sport Scene with Steve Russell, and "The Tailgate." In addition, Sam provides weekly sports updates for WUFT News and radio Sportscenter's for WRUF radio. Sam has been a writer at ESPN Gainesville since January 2020.
@sampetosa5
Previous UF Track and Field Competes in SEC Indoor Championships
Next Trenton Falls In State Semifinals: Season Review