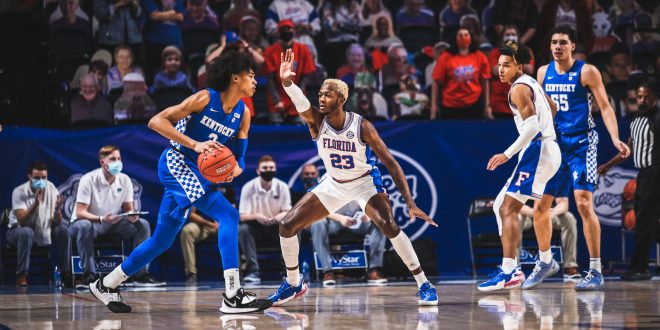 The Florida Men’s Basketball team is hitting the road to play the Kentucky Wildcats.

Coach Mike White and the Florida Gators match up with the Kentucky Wildcats in their final meeting for the regular season. Prior to this game, the Gators had an impressive 74-57 win against Auburn. Sophomore guard Tre Man stepped up for the Gators, scoring 19 points and 13 rebounds. This made it his first career double-double. Alongside Mann was teammate Scottie Lewis with 16 points.

Entering this match, Florida looks for redemption. The last time these two teams met on Jan. 9 in Gainesville, the Gators were not able to defeat Kentucky, taking a tough 76-58 loss. Anthony Duruji led the Gators in scoring for the match up with 15 points and three rebounds.

Coach White had this to say about their upcoming matchup against Kentucky:

As the end of the season slowly comes to an end the Gators look to potentially finish on a five-game winning streak increasing their NCAA tournament resume. Entering a Quadrant 1 opportunity against Kentucky.

Coach Calipari and the Kentucky Wildcats enter this game, coming off a blowout 70-55 win against No.25 Tennessee. Kentucky currently is on a three-game winning streak.

In their first matchup against the Gators, Kentucky managed to have four players in double-figures:

Certainly, a show will be put on. Both Kentucky and Florida forwards stand aside each other leading the SEC in blocks. Kentucky’s Isiah Jackson leads the SEC in blocks averring 2.7 a game, and junior Colin Castleton sits in second in the conference.

Tip-off is set for Saturday at 4 p.m in the Rupp Arena.