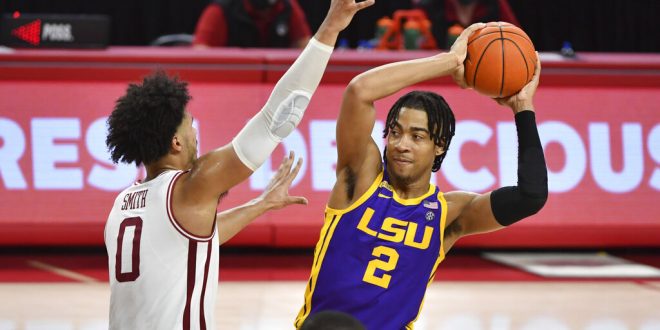 LSU forward Trendon Watford (2) tries to get past Arkansas forward Justin Smith (0) during the second half of an NCAA college basketball game in Fayetteville, Ark. Saturday, Feb. 27, 2021. (AP Photo/Michael Woods)

After losing its’ past two games, the LSU Tigers look to bounce back against the bottom-dwelling Vanderbilt Commodores on Tuesday night.. Vandy, despite winning their last game against Ole Miss, has lost 11 of their 14 SEC conference games.

The Tigers Look to Build Momentum

Head coach Will Wade and the Tigers have been public in their disappointment in their performance for the past two games. An eight-point loss to No. 20 Arkansas, regarded as one of the best teams in the conference, was one of them. However, a double-digit loss to the Georgia Bulldogs, who are (7-10) in conference play, raised tensions among the team.

For the “Bayou Bengals,” a home game against the potential-worst team in the SEC should be a good way to rebound from their slump. LSU is viewed as a middling NCAA tournament team; if they want to move their stock up, a solid run in the SEC Tournament could help. With two games left before the SEC Tournament, a win against Vanderbilt could help garner momentum. This game is also the last home matchup of the year for the Tigers, so the team will be looking to close out their season in the Pete Maravich Assembly Center in style.

The last time we #BootUp at home this season…

With three games left on the schedule for Vanderbilt, it is a safe bet to declare that the Commodores will not be making the NCAA Tournament, and likely not the National Invitational Tournament, or the NIT, either. However, there have still been glimpses of hope for the black-and-gold faithful. Scottie Pippen Jr. is one of them. The sophomore standout, and the son of Chicago Bulls legend Scottie Pippen, leads Vandy in both points and rebounds this season.

Pippen has increased his field goal percentage from 39.3 last season to 43.3 this season, and has maintained consistency behind the arc, shooting 36.5 percent from three-point range. In his most recent game against No. 8 Alabama, Pippen Jr. scored 24 points, four assists and three rebounds in a surprisingly close loss to the Crimson Tide. If head coach Jerry Stackhouse and the Commodores want a chance at shocking the world in Baton Rouge, they will need a big outing from the sophomore guard from Los Angeles.

The matchup between the LSU and the Commodores can be watched on the SEC Network. The game will tip off at 8:30 p.m.

Carson Cashion is a first-year student at the University of Florida, and has a major in journalism- sports and media. Originally from the Orlando area, Cashion covers the UF Gymnastics Team, having formerly covered Oak Hall Sports.
Previous Kentucky Basketball Aims to Get Back on Track in Oxford
Next No. 8 Alabama Men’s Basketball Battles Rival Auburn 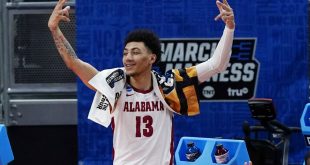 The 2021 Men’s NCAA Basketball Tournament began with five representatives from the SEC. Now, with …