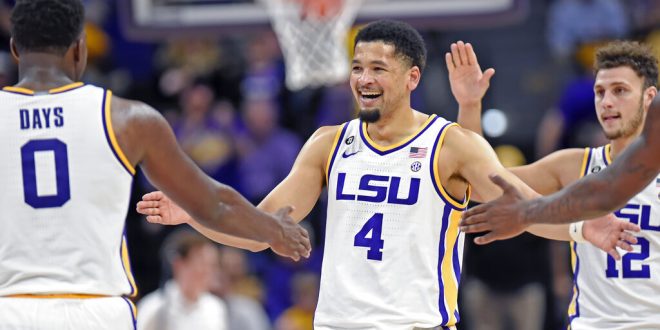 Tuesdays’ SEC slate of college basketball features matchups between LSU and Georgia along with Missouri and Ole Miss.  Florida is also scheduled to face Auburn.  Additionally, Kentucky was to face Texas A&M but the game was postponed after multiple members of the Aggies program tested positive for COVID-19.

The first of the two matchups, LSU vs. Georgia, will contain a surging Tigers team and a struggling Bulldogs group.  The Tigers are tied second in the SEC with a respectable record of (9-4).  Differently, after recent losses, the Bulldogs have dropped near the bottom of the conference and stand at a disappointing (6-9).  The game will tip-off at 7 p.m.

The story will remain the same when Missouri faces Ole Miss.  Despite being above .500 (7-6) in the conference, Mizzou has recently stumbled and lost their momentum.  Contrarily, Mississippi has caught their stride and vaulted to a once thought impossible (7-7) record in conference play.  The game will begin at 8 p.m.

When the Tigers clash with the Bulldogs, the game will display a matchup between opposing strengths and weaknesses.  Offensively, the Tigers are an elite team that currently ranks as the nations eighth highest scoring per game offense.  Then, defensively, the Bulldogs immensely struggle.  They are allowing opponents to score just over 50 percent of the time with a shocking 110.4 points per 100 possessions. This statistic ranks second to last in the SEC.

Regarding their recent games, the Tigers were able to ransack Auburn and drop a colossal 104 points.  Then, the Bulldogs have allowed an average of 88.5 points over the last four games.  In order to emerge victorious, Georgia will need to turn up the heat defensively or LSU will need to have a disappointing outing.

The showdown between Missouri and Ole Miss will likely come down to the turnover battle.  The Rebels are able to put up points, but the majority of their scoring comes off turnovers.  Fortunate for the Tigers, they rarely turn the ball over.  Mizzou averages a mere 13.4 turnovers per game, ranking them fourth in the SEC.

For both teams, the turnover battle is not mere an area of concern but rather where the game is won and lost.  At the moment, Mizzou has lost three of its last four games.  In those three loses, they averaged 13.66 turnovers.  While that was just above their season average, it was too many against quality opponents such as Ole Miss, Arkansas and Georgia. Differently, in the game they won, they had a mere nine turnovers.  Largely, the Tigers success hinges on dictating pace of play and that is made impossible when they turn the ball over.

Contrary to Missouri, the Rebels have won four of their last five.  As aforementioned, their success was a result of turnovers.  In the four games they won, they averaged an impressive 9.25 steals.  Then, in the game they lost, they only had four steals.  When they fail to create turnovers, their offense becomes stagnant and stutters.  Missouri will hope the game is not a repeat of earlier in the season when the rebels beat them 80-59.

Where to Watch and Other Games

William Silverman is a junior at the University of Florida from Philadelphia who is interested in pursuing a career in business, communications and journalism.
Previous Wildwood Hosts Hawthorne in 1A Regional Semifinal
Next Eastside Faces Santa Fe For Boy’s Basketball 3A Regional Semifinal