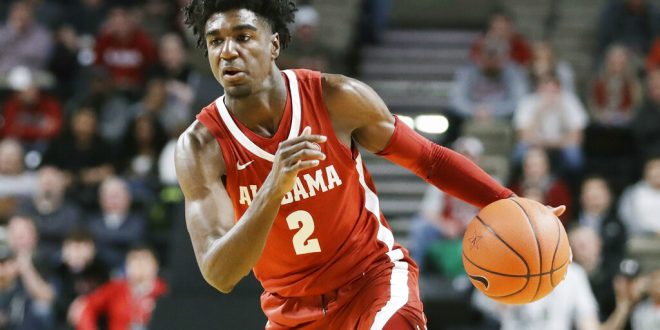 FILE - In this Jan. 22, 2020, file photo, Alabama guard Kira Lewis Jr. plays against Vanderbilt in the first half of an NCAA college basketball game in Nashville, Tenn. Lewis was selected by the New Orleans Pelicans in the NBA draft Wednesday, Nov. 18, 2020. (AP Photo/Mark Humphrey, File)

A changing of the guard. Most often, an SEC matchup between Auburn and Alabama features a dominate Tigers Team and a lackluster Crimson Tide group.  This occasion is quite the opposite. When the two teams meet Tuesday, March 2, Auburn will be looking to get their record back to .500 while Alabama will look to build upon clinching the SEC regular season title. The game will tip-off at 7 p.m.

Getting the Offense Going

Being ranked No. 8 in the nation and eyeing a potential no. 1 seed in March, one would think Alabama is rolling along. Well, think again. After rattling of 10 straight wins, the Tide have dropped three of their last eight. Additionally, three of those five wins came in contests that ended within five points. To make matters worse, their struggles are not are result of quality play from opponents but rather their own struggles.

The Tide’s identity revolves around their ability to score the basketball. Currently, they lead the SEC in total points scored and are third in per game average.  That said, over their last nine games, they have manage to shoot 40 percent or better only three times. As a result they have fallen to 37th in Ken Pom’s adjusted 0ffensive efficiency rankings.

Fortunate for the Tide, the Tigers represent an opponent who could jumpstart their offense. Auburn currently ranks 302nd in the NCAA, allowing an average of 76.9 points per game. In addition, they are a team that likes play fast, get out in transition and shoot the three ball. If Alabama is able to generate turnovers off Auburn’s quick play, they may be able to get the offense going and break out of their recent slump.

Auburn standout freshman Sharife Cooper has missed the teams last two games with an ankle injury. Despite currently being listed as doubtful, it is nearly a forgone conclusion that he will miss Tuesday’s game against Alabama. In addition, guard Justin Powell will also miss the game as he is still recovering from a concussion.

Cooper and Powell are the teams first and third leading scorers, respectively. Without them, only two Tigers average above 10 points. Additionally, Cooper leads the team in assists per game while Powell ranks second. Considering the absence in scoring and passing there will be without the two, the Tigers have a plethora of production to replace.

Fortunate for Auburn, sophomore Allen Flanigan appears eager and ready to accept the challenge.  In the Tigers last game, a win against Tennessee, he rained in an impressive 23 points. Even so, if the Tigers hope to remain competitive throughout the contest, they will need additional contributions from more than just Flanigan.

Described Sharife Cooper as “doubtful” for the Alabama game: “If he’s good to go, he’ll play. If he is not, he won’t.”

Alabama and Auburn’s postseason outlooks could not be more different.

Regarding Alabama, the Crimson Tide were able to deal Mississippi State on February 27th to capture their first SEC regular season title since the 2001-2002 season.

THIS ONE IS FOR YOU, BAMA NATION! 🐘🅰️#ALABAMA IS YOUR 2021 SEC CHAMPIONS! 🏆#BlueCollarBasketball | #RollTide pic.twitter.com/nC4oRYRrR7

As a result, the Tide have positioned themselves to make a deep run in both the SEC and NCAA Tournament. Starting with the SEC, the Tide have not won the tournament since the 1989-1990 season. Then, regarding March Madness, the Tide have a great chance to make their first final four. Currently, they are one of a few teams in consideration for a  No. 1 seed.

Much differently, the Tigers will not be participating in the postseason. As a result of recruiting violations, Auburn placed a self-imposed one year postseason ban on themselves. Thus, their season will come to a conclusion this week after they face Mississippi State on Saturday, March 6.

The game will take place in Tuscaloosa at Coleman Coliseum. Coverage of the game will be on ESPN 2 at 7 p.m.

William Silverman is a sophomore at the University of Florida from Philadelphia who is interested in pursuing a career in communications and journalism.
Previous SEC Basketball: LSU Tigers Host Vanderbilt Commodores
Next Gator Softball Looks to Extend Perfect Season