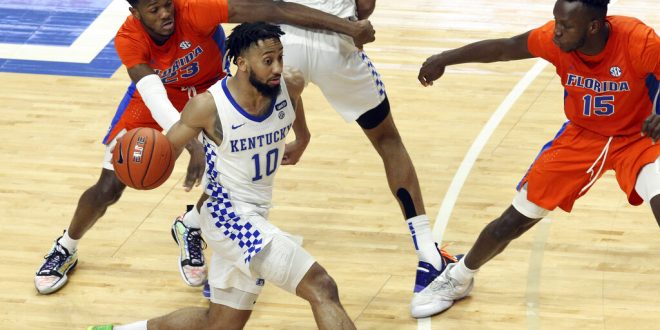 Instead, despite leading by double digits early, the Wildcats failed to hang on falling 71-67. While a huge road victory for the Gators, the loss was a tough blow for a Kentucky team that’s fighting to stay alive as March heats up. Now off to Oxford to face an Ole Miss team, getting back in the win column is no easy task.

A late one in Oxford

A Shaky Season for Kentucky

Maybe the craziest part of all of this, Kentucky can still win a championship.  A road win tonight will be the first step in a long, difficult road to the Big Dance.

Essentially, Kentucky’s only hope to remain alive for March Madness play is to win the SEC tournament. Winning tonight can help bolster seeding for the conference tournament, but a win or loss doesn’t really change much of the big picture.

Winning the SEC tournament isn’t impossible for Kentucky. The Wildcats had the top-rated recruiting class coming into the year, per 247 sports. Based purely on recruiting rankings, Kentucky is the nation’s second most talented team, behind only the Duke Blue Devils who are also having a down year.

Both Boston and Clarke average double-digit points per game.

This talented Kentucky team must come together as a unit to firmly hit their stride. For now, the Ole Miss Rebels stand in their way.

For the Rebels, the team’s success runs through star senior guard Devontae Shuler. Shuler averages a team-leading 16 points per game on the season. He also is the unit’s top facilitator averaging over three assists per game.

It’s been an up and down season for the Rebels as they have bizarre combination of great wins and bad losses. In just February alone, Ole Miss has wins over then-ranked Tennessee and Missouri (twice). But they also have losses to (12-11) Mississippi State and (7-13) Vanderbilt in the last week.

The inconsistency makes the rebels a confusing team, but there’s no doubt the star power of Shuler makes them a tough beat. On Feb. 6, Shuler beat Auburn on a stunning buzzer-beating jumper to cap off a 26-point night.

It’s a performance like this that Kentucky must avoid if they want to capture victory in Oxford.

Catch the action, tipping off at 9 p.m. Tuesday night on ESPN.

Will Levenson is a Journalism and Sports Media major at UF. He produces daily shows for WRUF, including "Sport Scene with Steve Russell," "Harp on Sports," and "The Tailgate." In addition, Will provides weekly sports updates for WUFT News and radio Sportscenters for WRUF radio. Will has been a writer at ESPN Gainesville since September 2019.
@BigWillLevenson
Previous Arkansas Looks to Continue SEC Streak Against South Carolina
Next SEC Basketball: LSU Tigers Host Vanderbilt Commodores