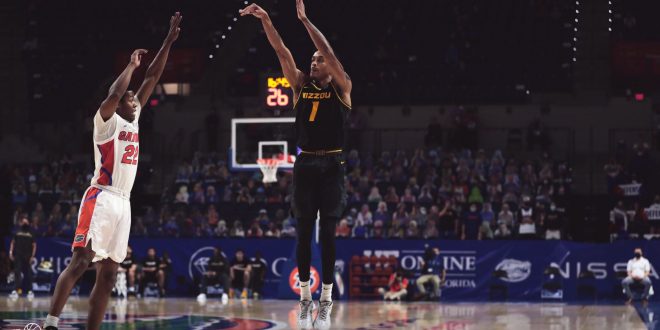 The Florida Gators dug their own grave tonight in their 72-70 loss to the Missouri Tigers.

In a night where the Gators shot for over 58% from the field, they simply could not keep the ball in their own hands. They ended the night with 18 turnovers, giving the Tigers 25 points off turnovers and nine steals.

And while Florida did win the rebound competition with 28 to Missouri’s 26, 24 of Florida’s came from defensive rebounds while 11 of Missouri’s came from the offensive side of the ball.

Dru Smith led the Tigers in scoring with 17 points and nine assists. Mitchell Smith and Xavier Pinson each added 14 to the Tigers’ total.

The most impressive stat for Missouri though was their nearly 41% shooting from behind the arc. And they always seemed to be able to knock them down right when they needed them.

Tre Mann continued to show why he earned SEC Player of the Week with another huge offensive performance. He went 9-11 and finished with 21 points and three assists.

And while it was not Anthony Duruji’s best offensive night, he stepped up on the defensive end. He finished with 11 rebounds and a block.

Before any points could even be scored, the game began with two back-to-back turnovers by both teams. Florida found somewhat of an offensive rhythm fast though, after a floater from Mann and a three from Noah Locke.

As SEC player of the week, people wondered how Mann would respond to the honor. And he proved it didn’t phase him, scoring four in the first three minutes.

However, it didn’t take much longer for Missouri to find an offensive rhythm of its own and took an 8-7 lead. Both teams continued to have turnover problems though, with five each in the first five minutes.

Duruji got a huge block for Florida and another three from Locke gave them back the 14-12 lead. Halfway through the first half, Mann and Locke accounted for 17 of Florida’s 21 points.

Despite shooting 67% from the floor, the Gators only led by two with six minutes left due to 11 turnovers which resulted in 12 points for the Tigers. And just a few seconds later, they picked up their 12th turnover. Missouri then continued on a 14-2 run to take an eight-point lead.

Meanwhile, the Gators had 15 turnovers in the first half to the Tigers’ seven. A flagrant foul called on Duruji gave Missouri foul shots and the ball. The two teams head into the locker room with the Gators down by seven.

Missouri started the half with two fouls, but the Gators quickly picked up another turnover. A three from Mitchell Smith put the Tigers up by 10.

However, a Scottie Lewis three and Mann layup brought the Gators back within five. Colin Castleton picked up his first points of the game but was quickly called for a technical foul. Lewis then fouled Smith shooting a three and Missouri’s lead was back to seven.

Mann brought the Gators back within three though with a layup and Omar Payne brought the Tigers’ lead down to just one. Coming out of a timeout though, Missouri regained control of the game and took a 47-42 lead.

Following a timeout, Tyree Appleby cut the Tigers’ lead to two with a three, but Missouri’s Mark Smith hit a three of his own. With just under eight minutes to play, the Gators got the ball back off a Missouri shot clock violation, only down by three.

Florida came out of the timeout though only to commit their 18th turnover. Duruji came back and got the court fired up with a huge dunk and his first points of the game.

Jeremiah Tillman picked up his fourth foul with four minutes to play and sent Mann to the line to convert an old-fashioned three-point play. Mann was involved in the Gators’ next four points as well with a floater for himself and assisting Castleton in a dunk.

Two free throws from Appleby put the Gators back within two with under a minute to play. Tillman picked up his fifth foul with 20 seconds to play, giving Castleton free throws and tying the game at 70.

Dru Smith pulled through for the Tigers though, hitting a reverse layup and leaving the Gators with just 0.7 seconds to come up with an answer.

And it simply was just not enough time for the Gators to get the ball across the court and through the net.

The Gators will finish the rest of their regular season on the road at Tennessee. This game was originally scheduled for February 10th and had to be postponed until March 7th.

Tennessee began the season strong but has lost three of its last five. Tipoff for Sunday is set for 12.