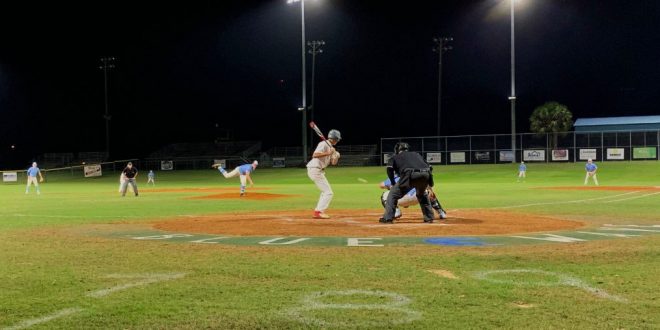 The PK Yonge Baseball Team (6-0) puts yet another win under their belt after beating Oak Hall (0-2) Monday night by a score of 7-3. However, similar to their game against Dixie County, it was not immediately apparent who would go home victorious.

At the top of the first, Oak Hall was quick to score two runs. Later, at the bottom of the second, PK Yonge scored with Senior Timmy DuPaul making it home. However, the second inning was shortly over after that. The third inning ended without any runs from either team and the score was 1-2 heading into the fourth inning.

During the fourth inning, things began picking up. At the top of the fourth, all bases were loaded for Oak Hall. A walk pushed the player on third to walk home, and Oak Hall scored another run. The score was now 1-3 and things were not looking good for the PK Yonge Team.

With two outs on the board, it was Junior Kyrin Griffith’s turn at the plate. Griffith hit an amazing triple that was missed by the left fielder. This, coupled with the catcher’s fumbles, allowed Sophomore Aidan Mansfield and Senior Nathan Nicholson to make it across the home plate. The game was now tied 3-3.

This led to PK Yonge overtaking Oak Hall and ending the fifth inning 7-3. PK Yonge’s strong defense and great catches prevented Oak Hall from scoring another run for the rest of the game.

Past, Present, and Future

Last year during the 2019-2020 season, PK Yonge was the number one team in 3A District 3 before they were unfortunately shut down due to COVID-19. Although now having a “younger squad for pitching” this year, Coach Rob Brunson hopes to maintain their top position in 3A and go to Districts.

Having a physically big team full of strong hitters does not put this goal out of reach. With multiple members standing over 6’0 tall and an average of 12 runs per game so far during the season, Coach Brunson is confident in his team’s hitting abilities.

When asked about their game against Oak Hall, Brunson was never worried his team would not take the lead. “We hit,” Brunson remarked, “and I knew that once we got our bats going, we would be alright.”

The PK Yonge Blue Wave plays their next game against the Eastside Rams on March 3 at home.