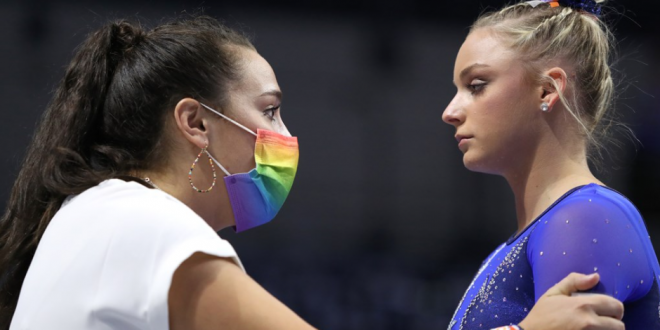 After rising all the way to the No. 2 spot in the nation, the 2020 Florida Gators gymnastics team was devastated to find out that their season would be canceled due to COVID-19. One of the gymnasts who felt this the most was Amelia Hundley. The senior, and four-time All-American, would not have a chance to win a national title with her team as a gymnast.

Despite this, she was not quite ready to leave Gator Gymnastics. This season, Hundley has returned to the team as a student coach, guiding the same gymnasts she called a teammate just a year prior.

Time as a gymnast

Before she ever became a coach for the Gators, Hundley was a strong gymnast for the team. Hundley posted career-best scores of at least 9.9 in all four events, including a 9.975 on the bars in the 2017 season. However, the moments with her teammates will be what stays with the gymnast from Hamilton, Ohio.

“It was like times like when we were traveling with the team that were so fun,” Hundley said. “Anytime in the gym, we were always goofy. The team atmosphere, the team aspect of always being together, that was probably my favorite.”

Like the rest of the world, the cancellation of the 2020 season for gymnastics did not happen overnight. It began with the SEC Championships for gymnastics; the postponements continued into nationals as well as, eventually, the remainder of the season. With the cancellations, Hundley’s career as a gymnast was over.

“We had like two weeks left of our regular season,” Hundley said. “It was senior night and we were looking forward to that and then in class on Monday, our teacher mentioned something like, ‘There’s talk about maybe going online I doubt that’s going to happen,’ and then I didn’t really think much of it. Then, every day, every moment, it was a trickle.”

Surprisingly, Hundley did not always see coaching as her first option. She entered college looking for a new career, after spending her whole life as a gymnast up to that point. However, her mother teaches at her family’s dance studio; this has always led her to believe that teaching is in her blood. From there, coaching was not a far-off idea.

“It was like my junior year, I‘m like ‘Maybe I want to coach.’ I love coaching, I love interacting with people, I love teaching, I love gymnastics, why not like teach people gymnastics? It all made sense.”

From there, the next decision to be made was whether she pursued collegiate coaching or coaching at a club level. Competing under one of the premier head coaches in college gymnastics, Jenny Rowland, surely had an effect on her. She ultimately decided to coach at the collegiate level and begin that journey as a student coach in Gainesville.

“Kind of as my junior year ended and I started my senior year, I went to Jenny and asked if there was a position for me open my fifth year. I kind of knew two years ago coming into my fifth year that this would be my role, and it’s something that I just really fell in love with.”

“I don’t know how my career is going to top this at all.”-Amelia Hundley

Since becoming a student coach for the Gators, Hundley has overseen the team to become the pre-season No. 1 program in the country and finish the year off with an undefeated home record. She has seen standout performances from gymnasts such as seniors Megan Skaggs, Alyssa Baumann and junior Trinity Thomas. Hundley was a teammate of all of these gymnasts.

An outside observer might be worried that a former teammate would not hold the authority necessary to coach the team. However, the current gymnasts have welcomed Hundley as a coach, just like they did as an athlete.

“She’s such an incredible person, and I really think she’s one of those people you can put in any role, and she will succeed,” Skaggs said. “As a teammate, she was so strong for us, and this year transitioning into the role as coach, she’s been such a strong presence in the gym.”

Multiple members of the program were ineligible to attend the “Link to Pink” meet against Kentucky due to COVID-19 protocols. This included both Rowland and Thomas. Hundley had to take on a larger responsibility and lead the team for the night. The Gators performed incredibly well under her watch, even with some of their stalwart athletes sidelined.

“She really is such a calming presence for the team, and a great mentor for every student-athlete on the team,” Rowland said. “She is so open and transparent that anybody and everybody feels comfortable going up and talking to her about anything, so I know they have that faith and that they have that confidence.”

“It’s been great to see her grow in that role and get more confident as a coach, while still building those relationships with us that she built throughout her four years here.”- Senior Megan Skaggs

After a season of coaching the Gators, Hundley is now certain that coaching is what she wants to do. As she begins her coaching search in the upcoming offseason, she will have the experience of working for what she calls, “the greatest coaching staff in the country for women’s college gymnastics,” and five years of competing and coaching experience for Gator Gymnastics.

“It’s been a really, really fun experience and it’s something that I wish to continue so we’ll see what happens after season,” Hundley said. “Whoever will have me, I‘ll be happy to go and start making as big of an impact that these coaches have made on me.”

Carson Cashion is a first-year student at the University of Florida, and has a major in journalism- sports and media. Originally from the Orlando area, Cashion covers the UF Gymnastics Team, having formerly covered Oak Hall Sports.
Previous No. 12 Seeded Gators Kick-Off SEC Tournament Against No. 13 Seed Auburn
Next Pk Yonge Baseball Washes Out Oak Hall, Remains Undefeated

Even after a fourth-place finish in the NCAA Gymnastics final, Florida Head Coach Jenny Rowland …