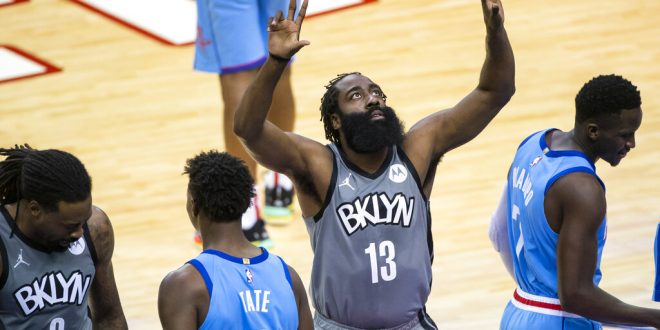 Brooklyn Nets guard James Harden (13) prepares to start prior to the first half of an NBA basketball game against the Houston Rockets Wednesday, March 3, 2021, in Houston. (Mark Mulligan/Houston Chronicle via AP)

It was a special night for the Brooklyn Nets and All-Star James Harden as he made his return to Houston in the Nets 132-114 victory over the  Houston Rockets.

The Nets’ win was their 24th of the season and tenth in their last 11 games as they currently sit in second place in the Eastern Conference. Hear from Harden on how he handled his return:

With the Nets once again without Kevin Durant, Harden registered a triple-double as he had 29 points, 14 assists, and ten rebounds despite turning the ball over eight times. This was the second straight game that Harden had a triple-double and his eighth of the season.

Harden received a mixed reaction from the 4,500 fans in attendance. Harden hit his first shot from distance to give the Nets a 6-2 lead. He only scored five points in the first quarter but continued to run the point along with Kyrie Irving.

Harden had 14 points by halftime but helped the Nets increase their lead from three to 13 by the end of the second quarter. He continued to play well in the second half and scored 15 points. Harden made four of his eight three-pointers in the game and played a team-high 40 minutes.

Former Rocket, Jeff Green, was unable to play in the game. He is still recovering from his injury he suffered against the Los Angeles Clippers and has missed the past five games.

Heading into the All-Star break, Harden is averaging 25.5 points per game, ranking 15th in the NBA. He will be making his 11 straight all-star appearance and first in with Brooklyn after coming over in a three deal where the Rockets received four first-round picks.

Up Next for Brooklyn

After the conclusion of the All-Star break, the Nets will take the court for a matchup against he Boston Celtics on March 11.