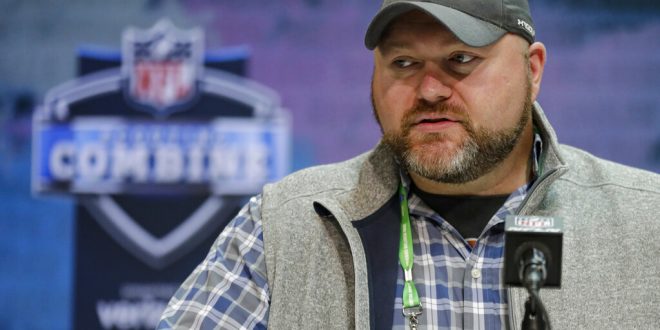 FILE - In this Feb. 25, 2020, file photo, New York Jets general manager Joe Douglas speaks during a news conference at the NFL football scouting combine in Indianapolis. Sam Darnold's time as the face of the New York Jets franchise might be nearing a disappointing end. The 23-year-old quarterback was considered an untouchable player on the roster only a year ago. General manager Joe Douglas has backed off that stance, though, and it could signal a major change at the position as free agency and the NFL draft approach. (AP Photo/Michael Conroy, File)

The New York Jets will have a lieu of franchise-altering decisions when the league new year begins on March 17.

Foremost, General Manager Joe Douglas will have to decide on a prospect with the second overall pick in April’s NFL Draft. Gang Green picks nine times in Las Vegas, headlined by two first-round picks (second overall and 23rd). After fielding a (2-14) squad in 2020, Douglas looks to rebuild his roster along with newly hired head coach Robert Saleh. History shows the NFL Draft promises an opportunity to rebuild. Douglas explains below.

With Clemson quarterback Trevor Lawrence as the presumed No. 1 selection, the Jets are on the clock. However, it’s yet to be seen which route New York will go with its selection. Currently, the Jets are fielding offers on 2018 first-round pick Sam Darnold. In three seasons as a starter, Darnold has 8,097 yards along with 45 touchdowns and 39 interceptions to his name.

That’s the best by any FCS QB since 2012. He can grip it and rip it downfield. pic.twitter.com/0Wniy8Xjbh

If the Jets do trade Darnold, the No. 2 pick can serve as the USC products replacement. Keep an eye on former BYU quarterback Zach Wilson if New York elects this route. Wilson emerged in 2020, posting 3,692 yards in the air along with 33 touchdowns and three interceptions. An (11-1) record capped off the BYU products season, where he finished top-three in passing yards. Garnering comparisons to Josh Allen, Wilson is an option at No. 2 for Douglas. Look out for former Ohio State quarterback Justin Fields as well, who recently defeated Clemson in the College Football Playoff.

Yet if Gang Green keeps Darnold, they could invest the No. 2 selection into protecting him. Oregon’s Penei Sewell is sensible in this range. Widely regarded as the draft’s top tackle prospect, Sewell opted out of the 2020 season. But, in 2019 the Oregon product was tabbed as the best interior lineman in college football, receiving the Outland trophy. Darnold was sacked 35 times in 2020. If the Jets pick Sewell, they’ll be investing in Darnold’s future. Additionally, they’ll automatically garner their best tackle since D’Brickashaw Ferguson played on Sundays.

Through trading safety Jamal Adams to Seattle, the Jets picked up the 23rd overall pick in the draft. With a rebuild in mind, Douglas can pick up a quality depth piece at 23. New York can approach this a few different ways. For one, Douglas can address the league’s 32nd offense in 2020 by picking up a playmaker. Think Florida’s Kadarius Toney, Clemson’s Travis Etienne, Minnesota’s Rashod Bateman, LSU’s Terrace Marshall Jr. and Alabama’s Najee Harris in that range.

Before the draft, comes free agency. The Jets have $68,725,814 in cap space for 2021 (No. 3 in the NFL). After ranking 29th in Pro Football Focus’ OL rankings, New York has a hole at guard. Joe Thuney, coming off a franchise tag from New England, is sensible given the cap space.

Additionally, Gang Green is going to be in the receiver market. Lucky enough, the crop of receivers is plentiful. Allen Robinson II, Kenny Golladay and JuJu Smith-Schuster headline 2021’s class. While the Jets could draft a receiver, a flier can be taken on a receiver such as Corey Davis, Will Fuller V or Marvin Jones Sr. Whether it be free agency or the draft, expect New York to address this position of need.

The Jets will also have to address the secondary. Former Gator Marcus Maye, the 2020 team MVP, is due a new contract. After the acquisitions of Pierre Desir and former Gator Quincy Wilson didn’t go as plan, look for New York to upgrade at this position. Richard Sherman is a name that pops out. However, after shining in 2019 with the 49ers, the veteran becomes an intriguing option for Joe Douglas. Sherman would also be reuniting with his former defensive coordinator, Robert Saleh.

What’s Next for the Jets?

The NFL window for legal-tampering begins March 15. Then, the league new year will begin on March 17. On April 29, the NFL Draft will commence until May 1.

Sam Petosa is a Journalism major pursuing a Specialization in Sports and Media at UF. The South Florida native produces daily shows for WRUF, including "Sport Scene with Steve Russell, and "The Tailgate." In addition, Sam provides weekly sports updates for WUFT News and radio Sportscenter's for WRUF radio. Sam has been a writer at ESPN Gainesville since January 2020.
@sampetosa5
Previous Harden Shines With Another Triple-Double in Return to Houston
Next San Diego Padres Looking to Make Big Jump This Season