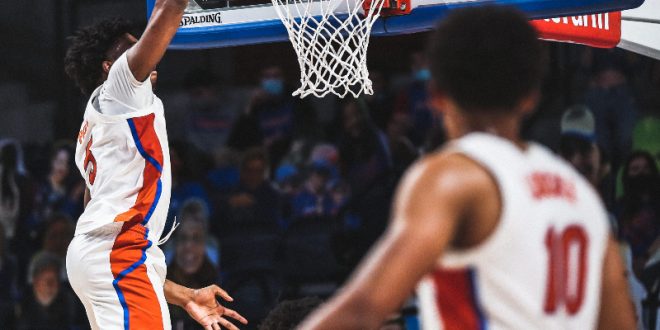 The Florida Gators Basketball team fell to the Tennessee Vols 65-54 on Sunday.

Final
Tennessee 65, Florida 54#Gators finish regular season 13-8 overall, 9-7 in SEC play. UF will be the No. 5 seed at SEC Tournament and face either A&M or Vandy Thursday.

The odds were stacked against the Gators during this matchup, with lead scorer and reigning SEC Player of the week Tre Mann sitting out.

Florida managed to put up a fight during the first half. They even had a 31-17 lead five minutes before the break, but the Vols scored 11 of the final 13 first-half points to shave the score gap. UT guard Victor Bailey Jr. scored a 3 pointer that spiraled to eight consecutive points heading into the second half of the matchup.

The second half is when things got rough.

UF was up by five following the break. Tennessee completed four offensive rebounds, while UT forward Yves Pons was awarded free throws after a foul. The Vols were also plus 11 on rebounds in the second half, doubling the Gators, while only allowing six field goals. Ultimately ending the game in their favor.

They secured the No.4 seed and a bye week heading into the Quarterfinals.

As for the Gators, they are the fifth seed and play the winner of the Texas A&M and Vanderbilt matchup during Thursday’s second round.

With Mann out, Tyree Appleby took over in leading the Gators. He scored 19 points with 10 turnovers, whereas Colin Castleton added 11 points to the scoreboard.

“We are an emotional team, a team that has struggled with runs, both positively and negatively, all year. We got off to a really good start the first 15 minutes. Played really well and gave ourselves a shot to come in here and steal one on the road. And then, man. A couple empty possessions; gave in defensively; weren’t as sharp in transition defense; defending the glass really failed us. They just pounded us on the glass. Early second half, we came out of the locker room and it was the same thing for the last 20 minutes.”

Coach White explains that players on the bench got an opportunity to shine with Mann out. Redshirt Freshman Alex Klatsky got time on the court.

Sara Dastgerdi is a current student at the University of Florida.
Previous Pat Dooley’s Back Nine March 8
Next SEC Men’s Tournament tips off Wednesday