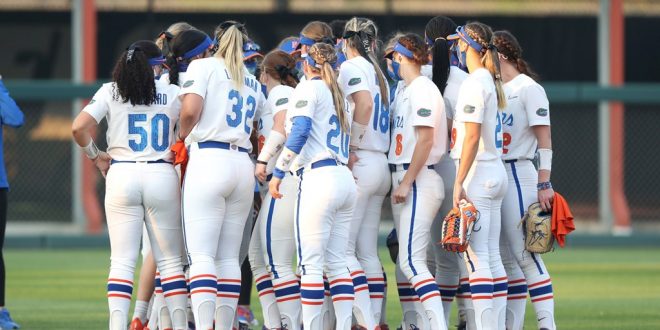 The Gators Softball team huddles in left field during their game against Florida State. Photo by Jordan McKendrick via FloirdaGators.com

Softball Looks to Rebound After First Loss of the Season

The sixth-ranked Gators softball team looks to rebound tonight after losing for the first time of the season against the Florida State Seminoles on Saturday. The team will welcome the 6-9 Kennesaw State Owls to Katie Seashore Pressley stadium for a mid-week matchup at 6 pm.

Gators pitching looking to bounce back

The Seminoles offense was able to get to Gator pitching early in the Gators matchup Saturday. Allowing five runs in the second inning, the Gators dug themselves in a deep hole. Although the Gators were able to get two runs back in the top of the fourth inning, FSU answered in the bottom of the fifth, ultimately handing the Gators their first loss of the season.

Despite the pitching struggles Saturday, Elizabeth Hightower earned SEC Pitcher of the week D1Baseball.com pitcher of the week for her performance last week. Pitching 11 innings in two appearances, Hightower held batters to a .057 batting average throughout her two games and held FSU to one hit Friday during her complete-game shutout.

The pitching staff is limiting opposing offenses to just 3.26 hits and 0.49 hits per inning pitched. Additionally, the staff has only allowed more than five hits in one game out of their total 15 games this year. The staff will look to continue these dominant number and put the Saturday game behind them against the Owls tonight.

Offensively, three Gators look to improve their impressive over .400 batting average. Cheyenne Lindsey leads the team in average and doubles, batting .467 with six doubles and also looks to extend her nine-game hitting streak. Hannah Adams is not far behind Lindsey, as she is batting .447. Adams leads the team in hits and on-base percentage, posting 21 hits with a .534 OBP.  Charla Echols seeks to improve her .419 batting average. Echols also leads the team with 16 RBIs, three home runs, and a .767 slugging percentage.

In their final game of a three-game series against the 22nd ranked UCF Knights, the Owls were able to defeat the Knights 8-1. Offensively, the Owls are led by three players of Lexi Solorzano, Brea Dickey and Taylor Cates. In the circle, Melanie Bennett leads the team with a 3.71 ERA and an impressive 47 strikeouts.

After the Gators matchup with Kennesaw State, the team will host the ninth-ranked Kentucky Wildcats in a three-game series starting Friday. This is the first SEC series the Gators will play, as they look to start strong in Conference play. All games will be streaming on the SEC Network+.