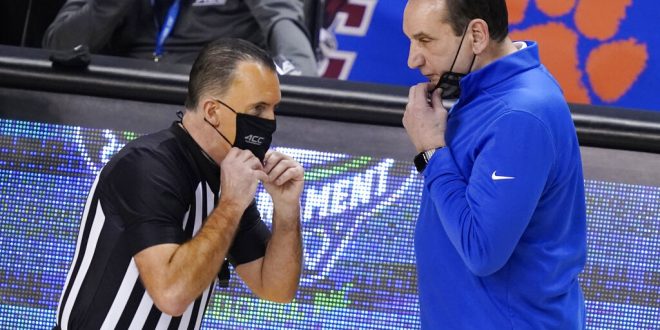 Duke head coach Mike Krzyzewski, right, talks with a ref during the second half of an NCAA college basketball game against Louisville in the second round of the Atlantic Coast Conference tournament in Greensboro, N.C., Wednesday, March 10, 2021. (AP Photo/Gerry Broome)

Duke Men’s Basketball has withdrawn themselves from the ACC Tournament due to a positive Covid-19 test within the program.

Thursday was slated to be the ACC quarterfinals between Duke and Florida State.  The ACC officially announced Thursday morning that Duke would withdraw themselves from the game due to “a positive test, subsequent quarantining, and contact tracing within the Duke men’s basketball program”. In a statement about the cancellation, Duke Athletic Director Kevin White said that the cancellation “will end our 2020-2021 season”.  The last time Duke missed the NCAA Tournament? 1996. The same year the Nintendo 64 was released, Major League Soccer made its debut, and eBay was launched. 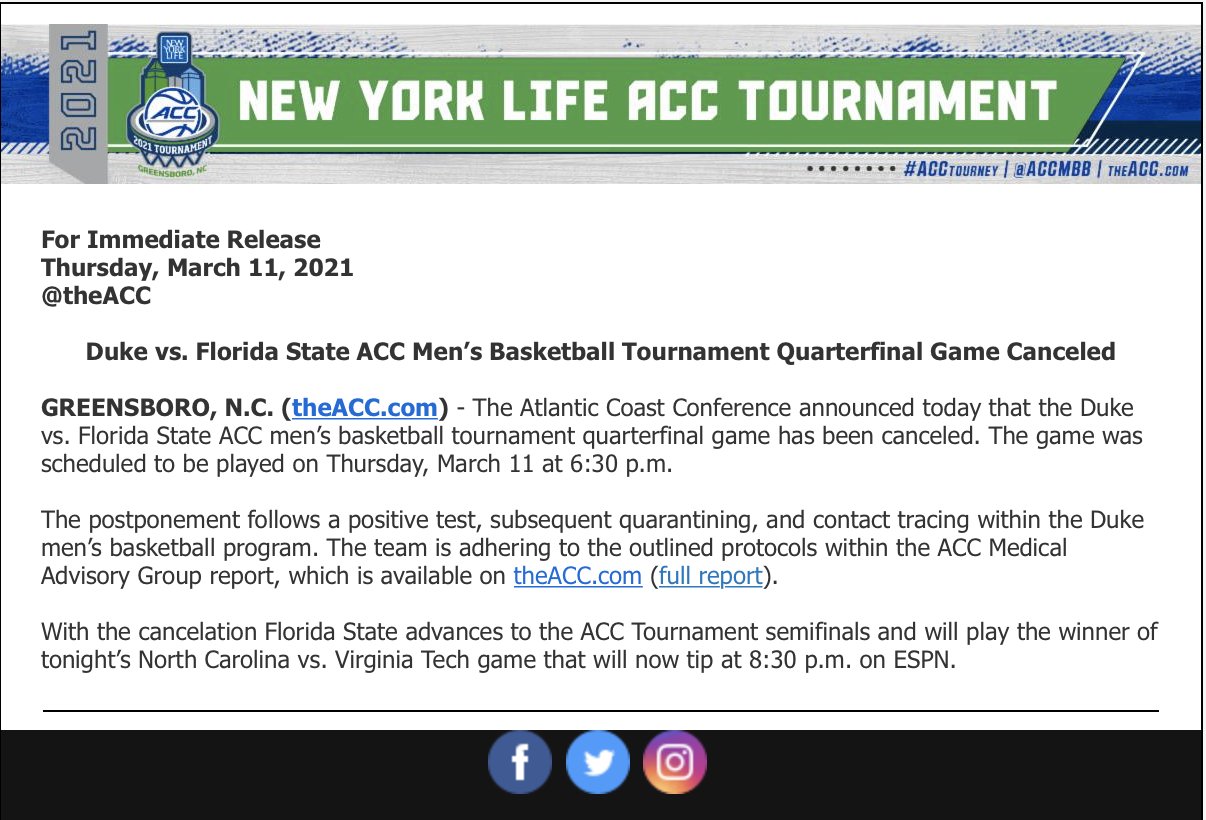 The Blue Devils had quite a disappointing season, entering the ACC tournament ranked 10th with a 13-11 record. Duke fell out of the coaches and AP polls early in the season, and spent much of the later part of the season “on the bubble” of making the tournament, Entering the week, Duke knew they had to win out to secure a seat in the NCAA Tournament. On Wednesday, the Blue Devils beat Louisville to keep their chances alive, but we won’t get to see the Blue Devils try for a magical run. It’ll be a change to see March Madness without Coach K and the Blue Devils.

This outbreak certainly serves as a reminder to all teams that one positive test can put an entire programs season in jeopardy. ESPN analyst Jay Bilas is confident, however, that the NCAA tournament will happen this season.

Despite falling short of the final goal, Coach K is very proud of what this Blue Devils’ team overcame this season.

“While our season was different than any other that I can remember, I loved the 2020-21 Duke Basketball team and was honored to be their coach. We have not asked more of any team in our history, and they deserve enormous credit for handling everything like the outstanding young men they are.”

Selection for the 2021 NCAA Tournament will take place this Sunday. The selection show will begin at 6 p.m. ET on CBS.